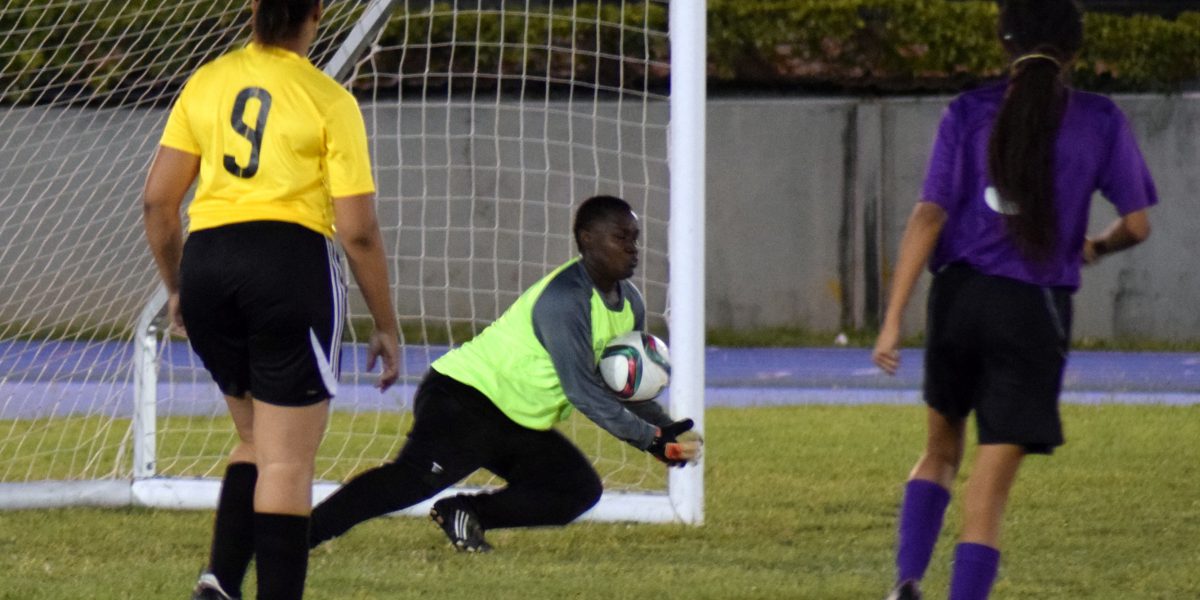 Rain may have diluted the crowd on Sunday, despite two exciting games, but nothing could detract from the excitement and enthusiasm which met the kick off of the Women’s League on Saturday, on the A.O. Shirley Ground.

The Women’s League is supporting Breast Cancer Awareness and the President of the BVI Cancer Society, Mrs. Gloria Fahie, was on hand to give opening remarks as well as F.A. President, Mr. Andy Bickerton, Sharlene Pond, Chair of the F.A. Women’s Committee and Mrs. “Bold and Breastless”, Shondia McFadden-Sabari.

“It’s a pleasure to be here tonight” commented Bickerton “the BVIFA take Women’s football very seriously, we are concerned about the number of females in the youth programme and we are looking at how to improve participation”

“Women Rock!” noted Mrs. Fahie “I just want to thank you all for partnering with the Cancer Society. I’m glad you young ladies are active as the more active you are the less likelihood there is of you getting cancer”

Shondia McFadden- Sabari, a double breast cancer survivor enthused the girls to keep on doing what they are doing and Ms. Pond invited everyone to get behind the Women’s Football initiatives “I want to encourage everyone to try and push the BVI Football Community forward, to have a vision, so we can grow the Women’s game and all football together”

The game that followed was a further indication of how women’s game is developing as the Ballstars overcame the Panthers 2-1 in an entertaining match, full of excitement, speed and skill.

The Panthers went ahead against the run of play with Silvia Massicot firing home from the edge of the box and then Lilly Pierce netted the equalizer before the Panthers conceded an own goal to hand the Ballstars all three points.

In Men’s action, the Islanders comfortably maintained their unbeaten start to the season with a 4-0 win over VG united as Andy Davis scored the opened the scoring in the first half and further goals came in the second from Kevin Fisher, Devon Letten and Nano Ottley.

The Wolues then crushed the Panthers 5-0, with goals coming from Kevin Carragher (2), Marc Savage (2) and James Drury, whilst on Sunday the Rebels beat One Love, 3-2.

D’Angelo Thomas and Joel Williams (2) scored for the Rebels and Richard Morgan netted twice for One Love, to join Kevin Fisher and Mohammed Kachour as the leagues joint top scorers, with 5 each.

The Sugar Boys rounded out the weekend with a scrappy 2-1 victory over Old Madrid, courtesy of goals from Mohammed Kachour and Terrence Nanton, who scored the winner from the penalty spot after Trevor Peters had equalized for Old Madrid.