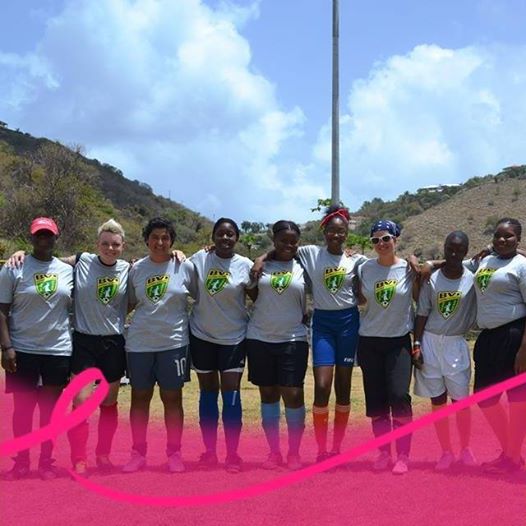 This Saturday, October 15th, the F.A. Women’s League kicks off with an opening ceremony at 5.30pm followed by the Ballstars F.C. against the Panthers Women at 6.00pm.

The Women’s games will be sandwiched between the two scheduled men’s game each weekend, with not just one team, but the entire league raising funds to support the BVI Cancer Society and their Breast Cancer Awareness Month.

“The empowerment of women should start from a young age especially in the areas of health and wellbeing.” Commented President of the BVI Cancer Society, Ms. Gloria Fahie “I commend the women football league for actively taking part in a sports that has been predominantly male oriented. Keeping active as young girls and in such a sport as football will reduce the rate of cancer incident!”

The League will be a nine a side tournament in order to get the Ladies back in tune with playing the game and will then revert to eleven a side after Christmas, with other plans that include Futsal and Beach Soccer, spear headed by new Chair of the Women’s Committee, Sharlene Pond.

Ms. Pond also has plans on getting more and more younger girls to play the game and do more to change false perceptions about the game being more for Men than Women.

The School League for Girls already includes teams from Elmore Stout, Anegada, Virgin Gorda, Cedar, St Georges and Seventh Day Adventist, which when linked to the existing clubs, will double the amount of females playing the game regularly in the Territory and put the F.A. right at the forefront of the brand new FIFA goal of doubling, to 60 million, the number of female football players worldwide by 2026 through the development and execution of a strategy to bring women’s football to the mainstream.

The Avengers and Virgin Gorda United make up the other teams in the league and games will take place every Saturday and Sunday until the Grand Finals on Saturday 19th November.