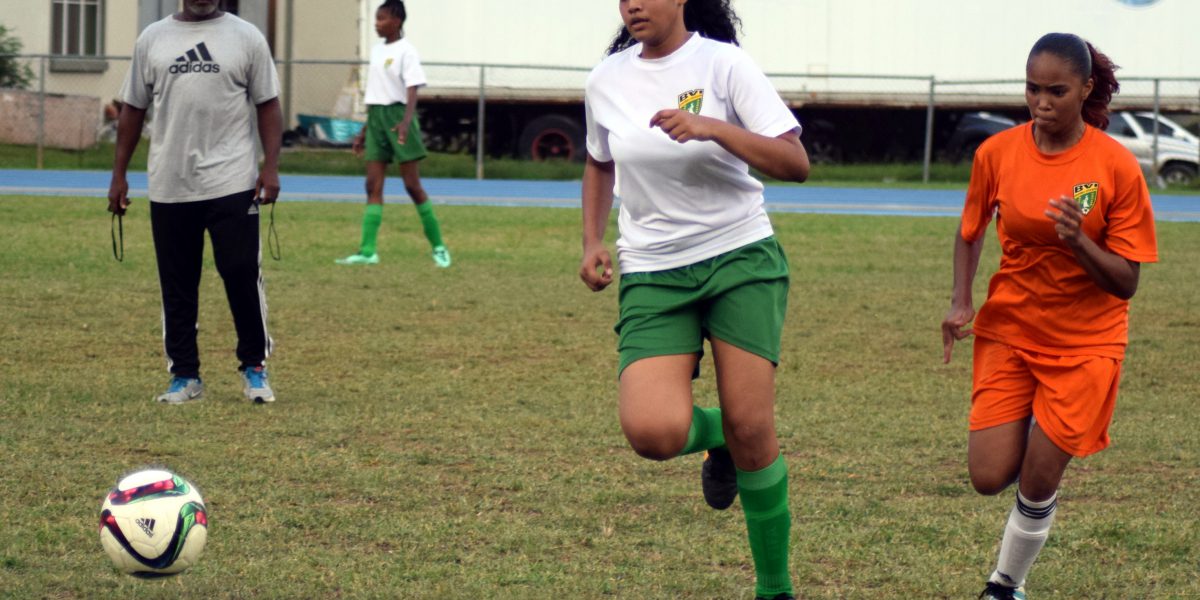 and action packed week of BDO Primary and BVIFA High School football games may have concluded with a rained-out game, but elsewhere spirts were far from dampened as early bragging rights were established.

The washed-out fixture came after heavy rains swept across Tortola on Friday afternoon and left both Elmore Stout Girls and Cedar Girls awaiting their first taste of this year’s competition. However over on Virgin Gorda, St Georges U14 Boys faced Begrado Flax Boys under a typically hot sun.

The game was eventually won 4-3 by the hosts, but not until they survived a swarm of attacking St George players looking to at least force a point from the end to end encounter.

J’khoi Ricardson with a brace had given BFEC the early advantage before Guillaume Parkins scored for the visitors. Jahdique Winchester then restored the two-goal lead and sent BFEC into the half time break leading 3-1.

Playing downhill in the second half St Georges created many chances, but fell further behind when Winchester scored his second to make it 4-1, but then Justin Smit gave St Georges hope with a quick-fire double strike to set up a tense last few minutes.

In other Under 14 action, BFEC also recorded a 5-2 win over the Seventh Day Adventist School, with Winchester scoring a hat trick and further goals coming from Levon Williams and Devante Samuel, whilst Wayne Reid and Matthew Murray replied for SDA.

Perhaps the game of the week though belonged to the first ever local “derby” between the Girls of SDA and those of St Georges.

Marline Daguiar opened the scoring for SDA and Neemie Odvil made it 2-0 before Sheniece St Jean pulled one back from the penalty spot late in the second half to set up an enthralling nerve wracking finish for Coaches, Players and a large amount of supporters from both schools.

However, SDA held on for a 2-1 win in the battle of Sea Cows Bay

Over in the BDO U7 league, Montessori recorded a 2-1 win over BFEC, with Man of the Match Charlie Potgeiter netting twice and Drekaily Findlay responding for BFEC.

In the Under 9’s, First Impression’s beat Joyce Samuel Primary School, 3-0, with Sakori Questelles, Blydon Aldridge and Man of the Match, Daniel Manning all finding the back of the net.

Robinson O’Neal then overcame St Georges, 2-0, on goals from Man of the Match Kyle Farrington and Te’Mauri Isaac.

Alexandrina Maduro Primary School Under 12’s beat Leonora Delville Under 12’s, 3-1, with goals from Man of the Match, Omari Simmons and Amari Dupuiz as well as an own goal, whilst Justin McKie responded for LDPS.

BFEC then had a narrow, 1-0, win over St Georges, with Andres Bailey scoring the only goal of the game and Joyce Samuel Primary drew 2-2 with SDA after two goals each from Jesse Cockburn and D’von Jones.