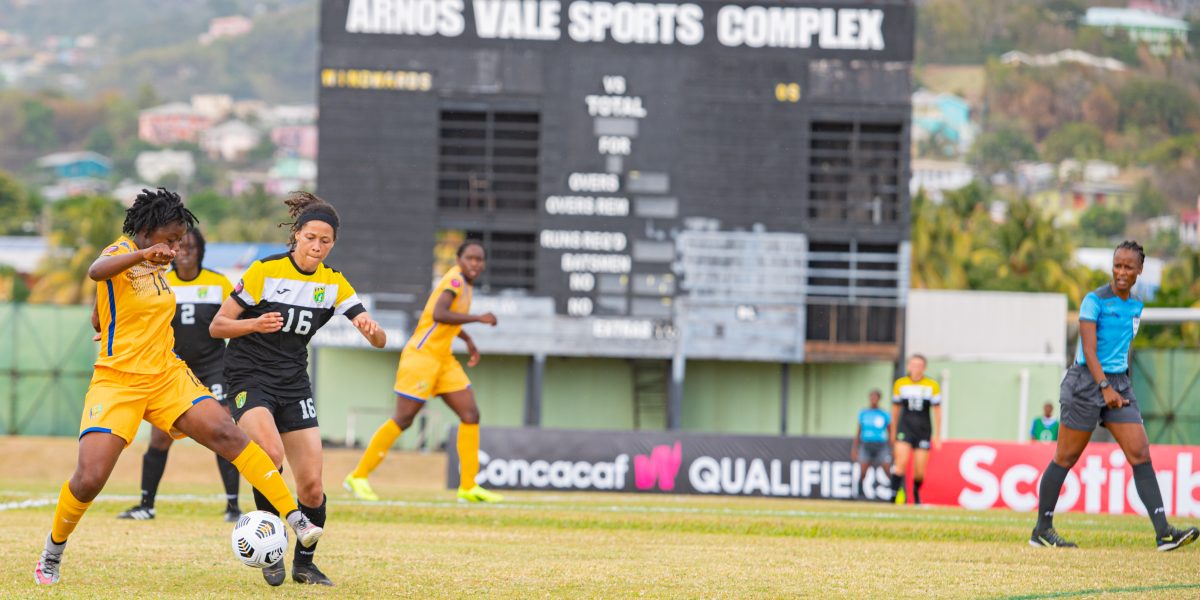 Conceding two early goals from set pieces put the hosts in command, but the BVI responded magnificently and were unlucky not to pull one back in the 28th minute when Jazz Cox almost took advantage of a goalkeeper error, bursting clear through on the empty net, before a last second block by a Vincy defender stopped a certain goal.

The Vincy then made it 3-0 just five minutes later and it was not going to be the BVI’s day, as just before half time Lavern Fahie hit the cross bar from twenty yards out.

Reward for the BVI team’s endeavors and willingness to keep running came in the form of an own goal 20 minutes into the second half, making it 3-1, but any hopes of a comeback were snuffed out with the goal of the game, a thunderous drive from twenty-five yards that gave goalkeeper Britney Peters no chance.

Peters did save a penalty with ten minutes to go, but the Vincy made it 5-1 after the BVI had been reduced to ten players following the sending off of Fahie for a second bookable offense

“a lot of improvements, especially in being able to create opportunities” commented Coach, Wayne Phillips “on this showing we have a good blend of experienced and younger players, so the future is bright. Yes, we could have done better, but overall, I am happy and proud of my players”

Next up for the BVI is a home game against Haiti, which is scheduled for Saturday 9th April on the A.O Shirley Ground. Kick off is 4.00pm and tickets are still available from the BVIFA office.

Adults are $12, Children U12 just $5 and there is an exclusive offer for those coming from Virgin Gorda of just $30 dollars for adults and $25 for children U12, which includes round trip Ferry ticket on Speedies