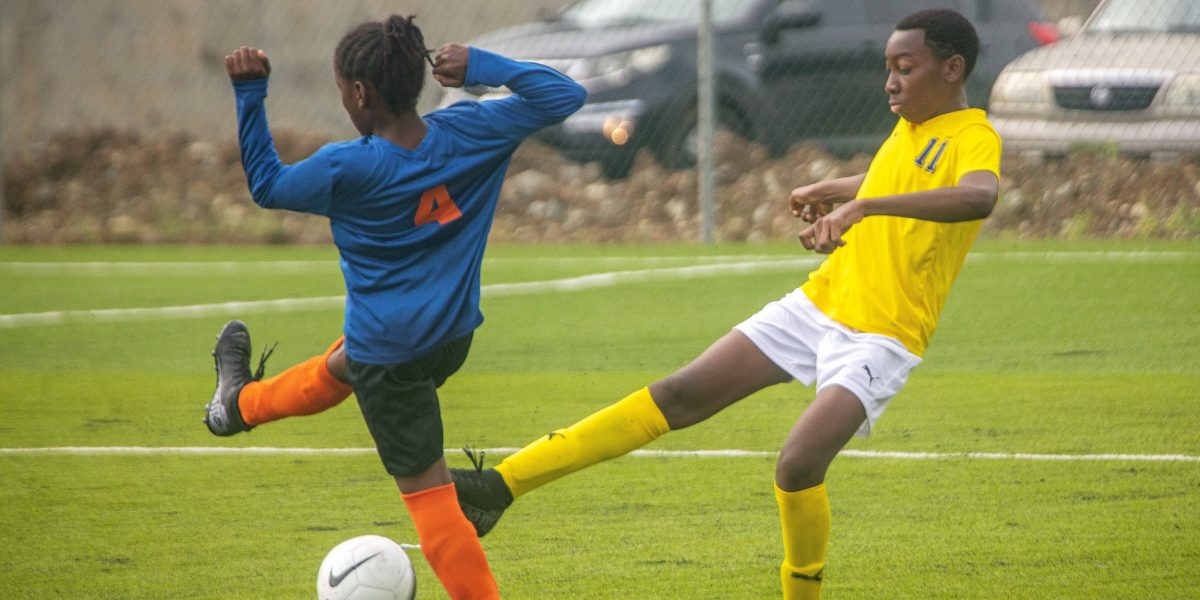 With the win at the East End / Long Look Stadium venue, the Panthers are assured top spot as they are ahead of the Wolues FC on goal difference and have a game to play, whilst the Wolues have concluded their season.

“We played at a real high level, starting build ups from the back, and working the ball up the field. The team showed their strength and ability to attack sugar boys defense taking their game to the next level.” commented Coach Wayne Phillip, who was also quick to praise the Sugar Boys for the level of their performance as well.

Christian Vanterpool netted a hattrick, including one exquisite move that saw Jahim Benji dribble down the wing before hitting the perfect cross for Vanterpool to head home. Myles Penn smashed a rocket shot from long distance that caught everyone by surprise on his way to a brace and Marcus Butler was also on the scoresheet.

Kyle Farrington was on hand to score both goals for the Sugar Boys.

One Caribbean FC thumped Old Madrid FC, 5-0, in the other U13 game played at the same venue, as Morris Carey scored a hat trick and both Marc Tan and Dawen Atime one each. 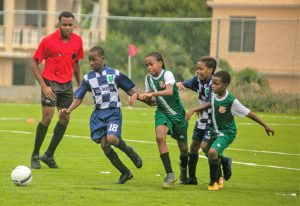 “It was a wet day, but the Old Madrid players did well in the first half” noted One Caribbean’s Morris Mark “but once Carey scored the opener, we took over and put the game away.”

Meanwhile in the U17 League, One Caribbean top the standings after a 14-0 rout of Old Madrid, but the destiny of the Championship Trophy is out of their hands as the Wolues have a game to play and are level on points with the table toppers, who have finished their games. 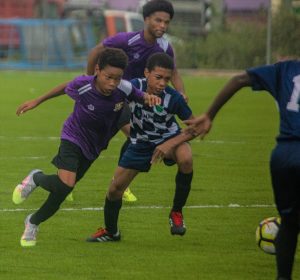 Adrian Adams (7), Johari Lacey (3), Milton Creque (2), Dylan Cline and an own goal filled the scoresheet for One Caribbean.

Short handed through injury Coach Morris Mark was pleased to see his younger players take center stage “After a quick start Adams and Lacey were put on the bench to allow the youngsters to play and it was good to see how they passed the ball around and kept possession.”

Anything else other than defeat to VG Utd next week will see the Wolues crowned as Champions and they made sure of staying in contention with a 3-1 victory against One Love Utd on Sunday.

Their opponents went ahead through Felix Walters in the 19th minute before Luca Reich equalized in the 26th. Johannes Blok put the Wolues ahead in the 31st and Reich netted his second to make sure of all 3 points in the 38th.

VG Utd saw their own slim chance of grabbing the title end in a 2-2 draw with Rebels FC, who went ahead through Denvin Jones in the 43rd minute and doubled their advantage in the 46th through Ikyjah Williams before T’Khoi Richardson struck back in the 47th and 57th minutes to grab a share of the points.

“It was a good, hard fought game” stated Coach Jermain Abrams “but we needed to win it!”

Next Saturday, February 6th, in the U13 League, Old Madrid FC take on the Panthers FC and VG Utd face One Caribbean FC, with both games scheduled for a 2pm kick off on the field at East End Long Look. In the U17’s, Rebels FC play Old Madrid, also at East End with a 3.30pm kick off.