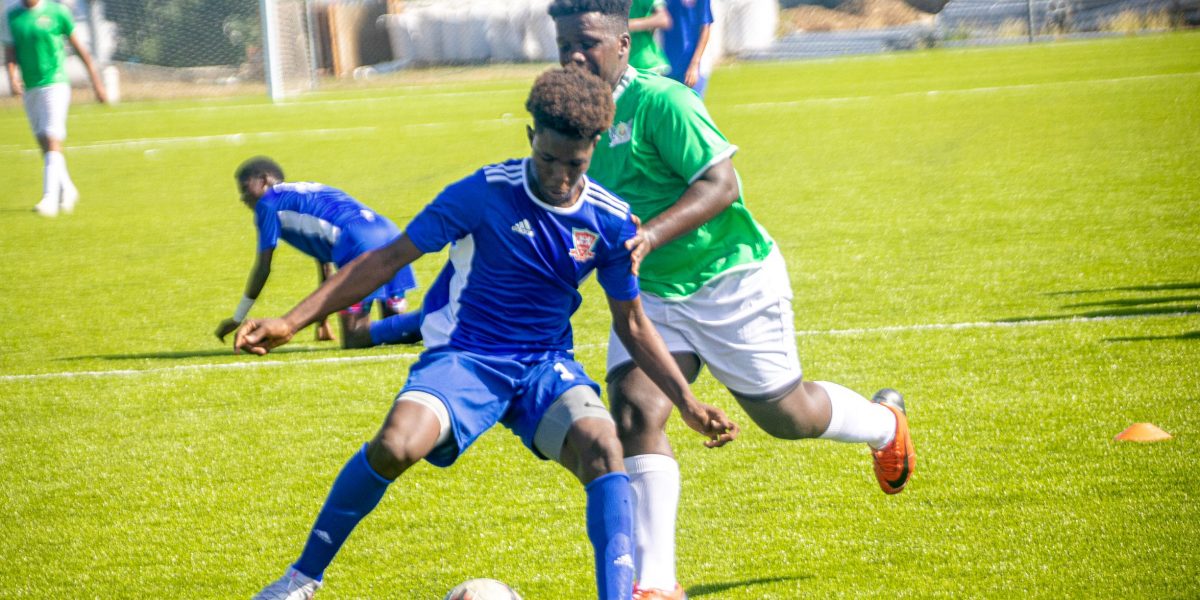 In the U13 National Youth League, Old Madrid FC found themselves engulfed by a fast flowing attacking VG Utd team, falling to a 7-0 defeat which also marked the first win of the season for VGU. The goals came from Kyle Flax (2), Qu’ily Billingy (2), Joliya Morton, Jezaan Demming and Shedani Lettsome.

“It was good to see the team celebrate a win” noted Coach Richie Morton “both teams played well and had fun, which is what it’s all about!”

One Caribbean FC fell to a 2-5 defeat by the Wolues FC, who had a Charlie Potgeiter hat trick to thank for what turned out to be a hard-fought win against the fast improving One Caribbean.  Although the Wolues had gone ahead 2-1 by half time, One Caribbean made it 2-2 before an injury to Morris Carey left the defense susceptible to Wolues attacks and further goals.

Blake Kirk and Oakley Hodges were also on the score sheet for the table topping Wolues, whilst Carey and Dawens Atime netted for One Caribbean.

In the U17 National Youth League

The 10-0 defeat of Old Madrid FC by the Wolues FC may have been a one-way traffic score line, but both on and off the pitch mutual respect was the order of the day as the Wolues Coaching staff were impressed with the way Old Madrid organized themselves and grew in confidence even as the score line ballooned into double digits.

“They played with a lot of heart” commenting one of the Wolues back room staff.

Although the Wolues went ahead early through Luca Reich, Old Madrid held firm and contained the fast-moving Wolues with a resolute back line. Increasing the tempo was always an option for the Wolues team though and one such move resulted in Rush Broderick doubling the scoreline.

Michael Palladino made it 3-0 from a delightful into space pass by Tinia Van Zoost that allowed him to drive behind the defense and catch the bottom right-hand corner. Reich netted the fourth after a beautiful combination of passing between Johann Blok and Rush Broderick, out on the wing, who then passed it square to Reich who made no mistake into the bottom left corner.

Sam Potgieter would open his account midway through the first half, winning a tackle and beating the keeper, one-on-one, with the outside of his boot and only seconds later he would get a second to make it 6-0, off a pass across the goal by Reich for an easy tap in.

Old Madrid stuck to their task and again kept the “Blue Wave” at bay, and it was not until deep into the second half when Oli Henderson and Johann Blok would add to the Wolues tally and give them the much-deserved win.

The Wolues coaches, impressed with the desire shown by the young Old Madrid team reached out to their coach to suggest that they visit JVD for a Manatees style coaching session to assist in what has become a fast learning curve for the youngsters , but one they are relishing in and making vast improvements in each week.

“They are such a great group of players” remarked Wolues captain Luca Reich “Next season they will be even better if they keep practicing and putting the time in at the pitch”.

The Rebels FC rounded out the weekend with a 7-0 win against One Love FC as Austin Prentice pulled the strings in midfield and goals came from Denvin Jones (4), Prentice, Howard Watson and Ikyjah Williams

“Prentice controlled the game from the first minute of play” commented Coach Lenon Audain “He dictated the pace of the game with style and composure, but the entire team played great, stuck to their roles and played hard right up until the final whistle”

This weekend, Saturday 30th January, in the U13 League, One Caribbean FC play Old Madrid FC, whilst Panthers FC take on the Sugar Boys FC, both games have a 2pm kick off at the East End / Long Look venue.

In the U17 League, also on Saturday, One Caribbean FC are up against Old Madrid FC in a game which kicks off at 3.30pm at East End / Long Look and then on Sunday 31st January, at the East End / Long Look venue, Wolues FC take on One Love Utd at 2.30pm followed by VG Utd against Rebels FC at 4.15pm.