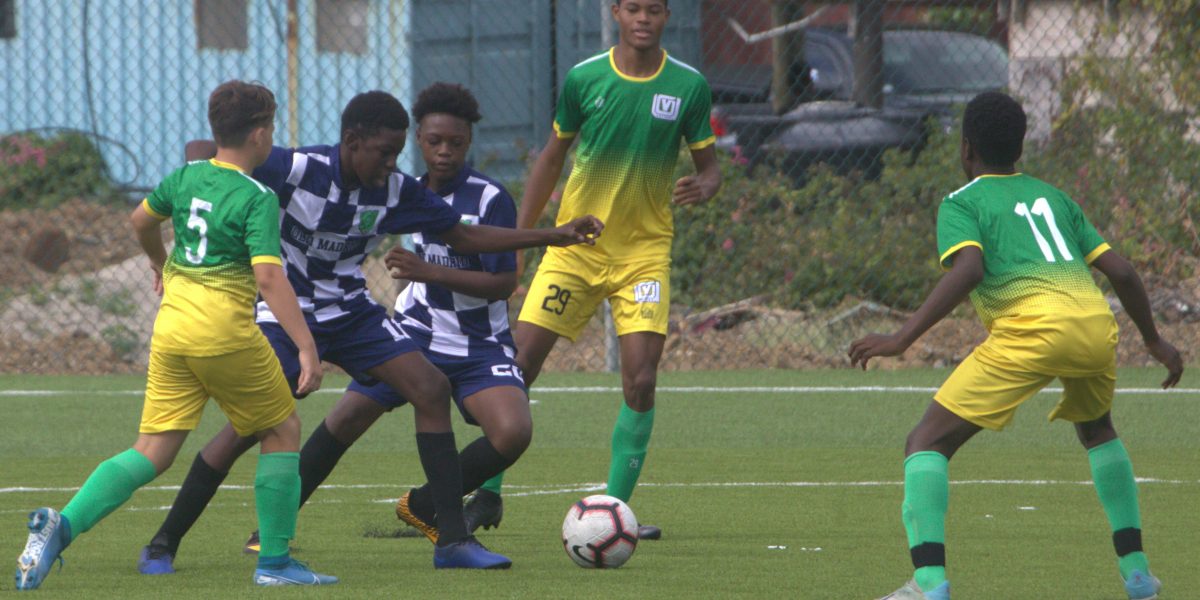 Action got underway Saturday at East End / Long Look, in the U13’s with the Sugar Boys FC overcoming Old Madrid FC 7-2 courtesy of a hat trick from Shau’mauri Lennard (6th, 30th and 43rd minutes), a brace from Kyle Farrington (9th and 29th) and one apiece from Liam Munn (3rd) and Kenroy Williams (50th).

Also, in U13 action the Wolues FC reached double digits in a 10-1 hammering of VG Utd with both Charlie Potgeiter (15th, 24th and 57th) and Oakley Hodges (6th, 44th and 53rd) scoring hat tricks. Blake Kirk netted a brace (25th and 48th), whilst Sofia Chilton (21st) and Giada Palladino (30th) were also on the scoresheet.

Qu’yle Billingy scored what turned out to be a consolation goal for VG in the 23rd minute.

The Panthers FC rounded out the U13 games beating One Caribbean FC 7-1, with a rush of first half goals putting them 4 goals up inside the first 21 minutes. Myles Penn grabbed two of those on his way to a hat trick (3rd, 9th and 32nd), an own goal bonus came their way in the 18th minute, Christian Vanterpool scored twice (21st and 57th) and Jaheim Bijai rounded things off in the 50th minute.

Devonte Smith found the back of the net for One Caribbean.

The Panthers win was enough to keep them on top of the standings, ahead of the Wolues albeit on goal difference with both teams on 9 points. In third are the Sugar Boys on 6 points.

On Sunday, also at the East End / Long Look venue , in the U17 League, One Caribbean managed to bring some relief to the Club, running out 6-1 victors against One Love FC.

“We had a game plan to come out and score as many goals as we could, and we did that as well as missing several other chances to add to the score line” commented Coach Morris Mark.

Dylan Cline and Johari Lacey both scored a brace, there was a goal right from the restart of the second half for Chad Fearon and Tai Thomas also scored for One Caribbean, whilst Jalen Prentice netted for One Love.

And to bring a hectic weekend to a close, VG Utd had a resounding 8-0 win against Old Madrid.

“Definitely a good restart after the break” noted VG’s Manager, Jermain Abrams “we were just a little bit sharper than them and had good ball movement. Lewis Munn was impressive scoring a hat trick, but skipper, Jaden Abrams also led the defense well.”

Munn scored his goals in the 10th, 32nd and 38th minutes, Abrams and Samuel Gilford also found the back of the net in the first half, whilst Mekyle Williams, Cedric Mars and Levon Williams all scored in the second half of a dominant display.

One Caribbean are top of the standings with 9 points but have played a game more than VG Utd who are second on 6 points just ahead of the Wolues, who also have 6 points, on goal difference.