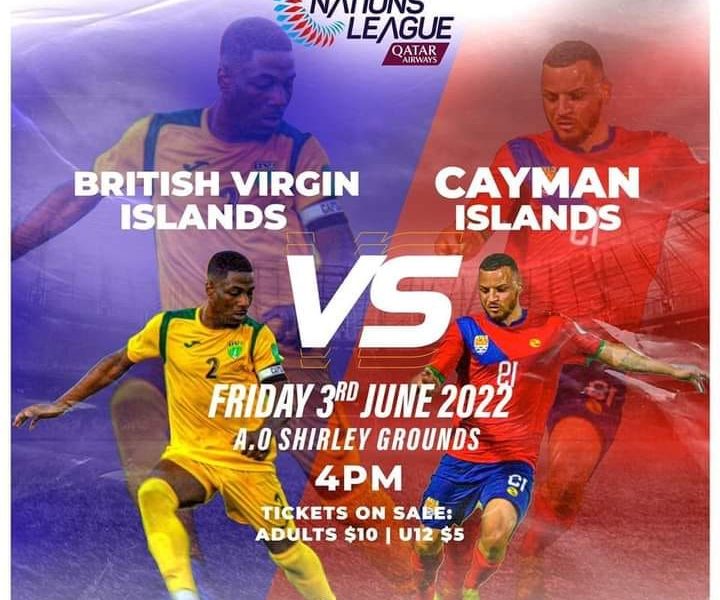 The hosts will be hoping that their second campaign yields more positive results than the first, which saw them finish bottom of the group despite some promising moments.

The Caymans, on the other hand, are eyeing promotion after narrowly missing out on League B last time around; they finished tied for first in their group but lost out to Barbados on goal differential.

Veteran Mark Ebanks has been banging them in for the Cayman Islands for over a decade and remains one of the top scoring threats on the team. He scored the goal in the Cayman Islands’ 1-1 draw with Bermuda during 2022 World Cup qualifying last year.

For the British Virgin Islands, most eyes will be on Tyler Forbes. Forbes impressed during the previous Nations League as a teenager, scoring three times and emerging as a young leader in the squad.

The two sides last met at the senior level during the first round of the 2005 Caribbean Cup, when the Cayman Islands edged a 1-0 victory.

Effectively the game sees the start of a new four-year cycle for the squad with many products of the FA Youth Programs cementing their places and some making their debuts.

“It is a deliberate move and a policy of the FA to introduce the youths to senior football. The strategy has been to get our most promising youths overseas to not only play but gain education through study and the number of young players breaking through shows the idea has worked” confirmed Mr. Andy Bickerton, FA President.

Also, new Head Coach, Chris Kiwomya, will be in the dug out for his first competitive game since taking over the reins “we have held camps during the buildup, and I am happy and confident with the composition of the squad. We are here to compete, play to our strengths, and how to win the game”

Kiwomya has been watching the younger players as well as the senior players and talking to all the local coaches to fully understand who can achieve what at this level “ we have had to be careful with the players and the intensity of training, but we are taking each day at a time especially with games coming in a short time frame and assessing everyone before narrowing down to the final squad. We must not get too far ahead of ourselves, it is a fresh start and there will be ups and downs, the players have to get the fans excited by their performance and over the next 18 months or so we can move forward, make progress and be a real force”

After Friday, the squad heads off to the Cayman Islands for the return fixture on Monday 6th June and then has an appointment with Puerto Rico on June 12th.

Troy Caesar is also back as Captain having been unavailable for the more recent World Cup qualifiers “we are here to compete, and it is great to see the camaraderie that flows throughout the players. Once we all listen and understand what the Coach wants us to do, then we will come out with a victory”

Ikyjah Williams has already played at senior level, having starred for the U20’s and is now joined by many of his teammates from the Tournament held in the Dominican Republic “I’m excited for the game, I know we will compete, impress the Coach, and play to win!”

Goalkeeper, Daniel Gilford has also been promoted to first choice between the sticks having been in and around the senior squad without getting a game “Becoming first choice, I won’t let anyone down and have been working hard, like everyone said we are here to compete”

“The FA is really excited by being able to play home games again” concluded Bickerton “we are still working on the stadium at East End and once that is done there will be more games at home. For now, we are working with the Recreation Trust to host games, and are very thankful for their support, but playing home games is really important so the public can see the progress we are making”

The game against Cayman Islands kicks off at 4pm on Friday 3rd June at the A.O. Shirley Ground. Adult tickets are just $10 and Children U12 just $5.