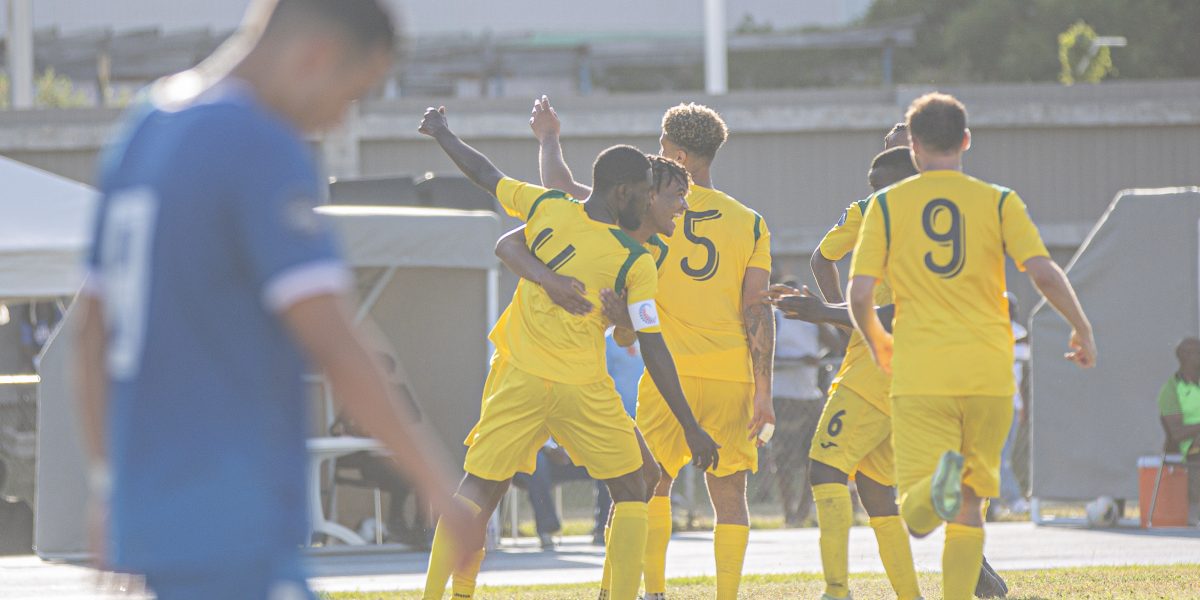 Hosting the first home game since 2016, the BVI weathered the early storm from the visitors on Friday at the A.O. Shirley Ground and grew in confidence as the first half wore on.

In fact, the BVI has the greater clear-cut chances with Jerry Wiltshire, seeing a header flash narrowly over the bar, Troy Caesar reacting first to a loose ball but just failing to get clean contact and Luka Chalwell bringing out a reflex save from David Lee, to divert a goal bound effort up and onto the cross bar.

At the other end, the BVI looked highly organized in dealing with any threats from the Cayman wide men and if there was a breach the Daniel Gilford making a senior debut was on hand to mop up the danger.

At half time it remained all square at nil nil with the visitors lucky to still be in the game.

They did have the first opportunity on the break in the second half though, but as so often in the game, and for both teams a first touch and an unforgiving surface proved an offensive downfall

Cayman had another chance from free kick which was deflected away for a corner which also came to nothing as the defense held firm and then in the 63rd minute the BVI won a corner which Jamie Wilson swung to the edge of the box where Jerry Wiltshire guided a header towards Caesar who flicked his header over the keeper and into the back of the net for a 1 nil lead.

“It was something we been working on for a while and it came out successful today grateful to God for the goal.” Commented Caesar

Levon Williams and Alejandro Santos were given senior debuts as the game wore on and the Caymans looked to up the pressure with their reward coming in the 81st minute through substitute Sirus Connelly, who equalized with virtually his first touch nipping into between defenders and the keeper to score.

In the 88th minute Tyler Forbes had a chance to put the BVI back in front but blasted his shot high and wide from a tight angle. It was the Caymans who finished stronger against the youthful and less experienced BVI, but who had enough tenacity and fight to close out the game despite coming under heavy pressure to thoroughly deserve the draw and a first point in this year’s Group Play.

At the final whistle new Head Coach, Chris Kiwomya was pleased with the way his charges had performed “Really proud of the boys. They worked really hard, and we got the goal but weren’t able to see the game out. It is a start but now we have to recover and go again. Some really stand out performances but as a whole really happy with the character of the team.”

FA President, Mr. Andy Bickerton, who had been instrumental in putting in place the Development program that is now bearing so much fruit in terms of young players able to compete at this level was also a happy man “A draw was a step in the right direction. The team worked tremendously hard to take the lead but just couldn’t hold on to the end. We gave debuts to Daniel Gilford, Alejandro Santos, and Levon Williams so three more players who came through our After Schools Program. Great performances throughout the team so difficult to pick individuals but inspirational leadership from Jerry Wiltshire and Troy Caesar. Overall, we are immensely proud of them, and we go again on Monday in the Cayman Islands.”

Monday’s return game will kick off at 6pm at the Truman Bodden Stadium, George Town.