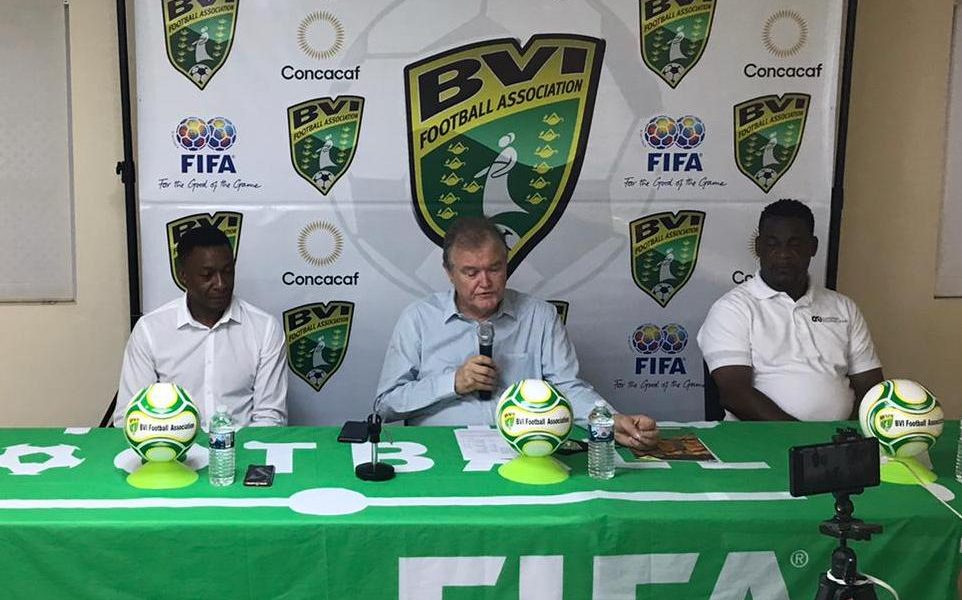 Kiwomya has already been active at a Camp in the UK for National team players as well as in the BVI overseeing a Camp for the U20 Boys ahead of their World Cup Qualifiers in the Dominican Republic in November.

“Chris Kiwomya will have responsibility for the men’s national team primarily and overseeing the progress of our younger age group teams such as the Under 20s.” stated Bickerton “Kiwomya’s background is quite significant in terms of the direction we want to head and from the FA’s point of view, we are very pleased to have such an experienced Coach on board”

Chris Kiwomya is an English former professional footballer and manager. He played as a forward from 1987 until 2002 notably in the Premier League for Ipswich Town and Arsenal. He also played in the Football League for Queens Park Rangers, as well as playing abroad for Le Havre, Selangor and AaB. He also played for the England U21 team. After retiring as a player, he went on to gain his UEFA Pro Licence from the English FA and has coached and managed at clubs including Arsenal Academy and Ipswich. In 2013 he had a spell as manager of Notts County.

On taking up his new role, Kiwomya commented that he was looking forward to the challenge of working with the players and making the game more professional. “it’s going to be a hard journey, but a really good journey and one where we are all going to learn together and work together to improve the standards of football, both as players and as Coaches.”

Morton noted that he had seen Kiwomya at work on a recent trip to the UK and had been impressed with his communication skills , levels of knowledge and the discipline with  which he conducted his sessions “he also has National pride and will be an asset to our organisation” noted Morton

Part of his role will also to be working with the Technical Director to put together a Coaching Philosophy and to implement a DNA of how we want to play football here on the island, but as Kiwomya confirmed “all the coaches will be involved and one thing I guarantee is the players will improve and get better so they are competitive, and we can go into games believing we can win! “

One of the main reasons Kiwomya was keen to accept the role was the hard-working ethos he had witnessed “basically I saw a lot of young players at the UK camp and also on Tortola and Virgin Gorda with talent and who are willing to work hard, which fits into how I like to work, and it suits me that they are keen to learn”

Kiwomya has hit the ground running, not only with last weekends U20 Camp, but also putting together some Strength and Conditioning programmes for players “its not all about training, but sometimes physical work and getting the body stronger.”

Kiwomya will also be helping the Women’s programme develop and will be working with the Coaches, watching some of the training sessions and using his experience to get the Women better technically and tactically.