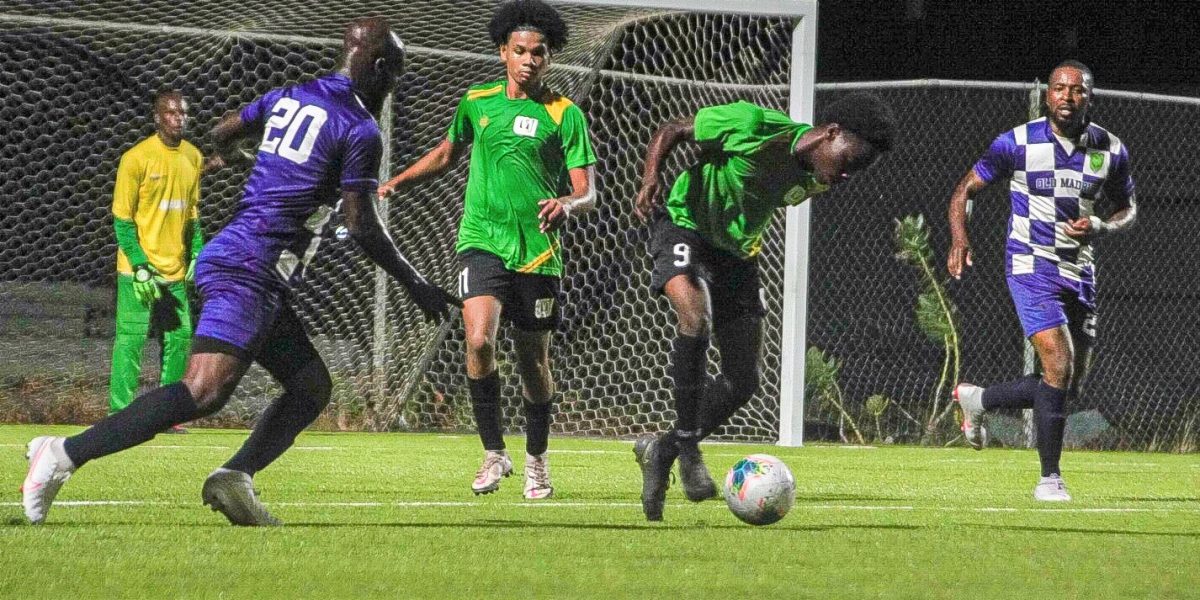 First up Old Madrid FC called upon all their tactical nouse to overcome VG Utd, 4-2, after Fitzroy Daley had opened the scoring in the 3rd minute before U20 National Squad player, Levon Williams, equalized in the 5th minute. Daley restored Old Madrid’s lead in the 38th and in the second half, Nano Ottley made it 3-1, before another FA Youth player, Devante Samuel, pulled one back to make it 3-2.

VG Utd pushed hard for an equalizer, but the destination of the points was made certain in the 87th minute when Ottley again found the back of the net.

Old Madrid Coach, Elroy “Mandraker” Mills was quick to praise the losing team “those guys are young and full of energy, so we had to slow the game down and let them run all the time, but those guys only got better to come!”

Old Madrid’s Kelvin Eubanks was thankful for the win, but also knew it had been a tough game “Despite playing a team that was overall younger and fitter than ourselves, we played well and stuck together. Our collective experience allowed us to defend well, play on the counter and handle their attacks. Timely changes made by the coach proved to finally turn the game in our favor and we were able to defeat what we see as a promising young team”

Another game full of youngsters saw Lion Heart FC hold on for a 3-2 win against One Caribbean FC.

According to OC Coach, Morris Mark, his squad is 75% from the U17 National programme and no less than 8 of them took to the field Sunday, including debutants Nicholas Haycraft & Johari Lacey with others, like Tai Thomas rested through injury.

The game started with One Caribbean having most of the possession and causing Lion Heart enough problems that they had received two yellow cards for reckless tackles before Romano Peters scored the opening goal, from a corner, in the 41st minute. Lion Heart then forced themselves back into the game in the second period, as Daveian Barnum scored twice inside 5 minutes to take a 2-1 advantage. Experience again showed itself as the youngsters fell further behind in the 67th minute through Dwayne Smith and the game was all but done before Kelvin Glasgow netted a late goal in the 87th minute to make it 3-2.

The Wolues had goals from Luca Reich, Noel Maxwell, and Paul Edwardes to thank for a 3-2 win over the Rebels FC, with all five goals coming inside the first 43 minutes, as Ikyjah Williams, another FA U20 player, scored twice for Rebels.

The Islanders also record a comfortable 3-0 win over Panthers FC as goals from Shamar Lawden (24th and 63rd mins) and Oswort Holder (80th) sent them top of the standings. 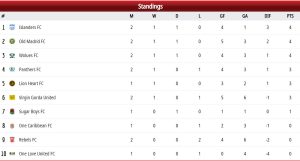