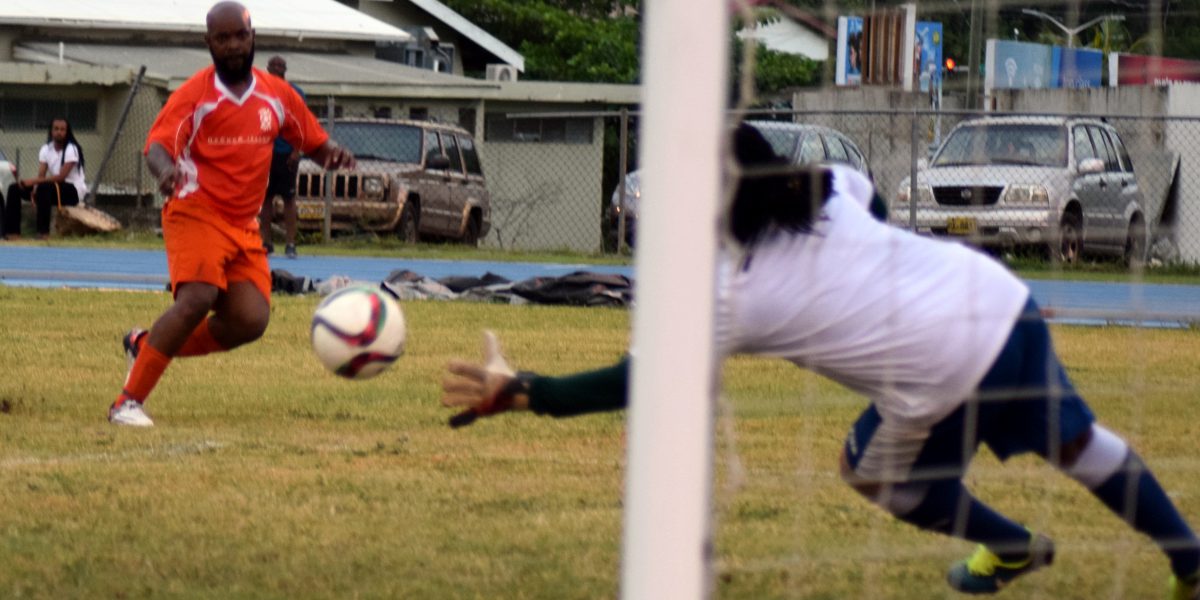 whilst the Islanders put a dent in the title hopes of the Wolues and the Sugar Boys stormed all over Virgin Gorda, the surprise result of the weekend’s National Leagues fixtures was without doubt Old Madrid’s 3-2 victory over One Love F.C.

Trevor Peters opened the scoring in the 7th minute before Talisman striker, Kenmore Peters, made it 2-0 in the 17th minute before Andre Thomas pulled one back for One Love in the 34th minute.

However, the goal of the game from Matthew Daley in the 37th minute and restored the two goal advantage for Old Madrid, when he won the ball in the midfield, cut across the 18-yard box and unleashed a curling effort past the keeper and into the net.

One Love mounted some severe pressure on the Old Madrid defense in the second half, but ultimately it took an individual piece of brilliance from Uriah Jnr Baptiste in the 70th minute to make it 3-2 and set up some anxious moments for Old Madrid, but they held on to claim all three points.

The Rebels then condemned the Panthers to another defeat with a comfortable 4-0 victory, which began in bizarre circumstances, when straight after Joel Williams’ headed opener, the Panthers had goal keeper Edgber Isaac sent off for a second yellow card.

His first came for a rash challenge on the edge of his own area and the second when seemingly in frustration at his own defenders for blaming him for the goal, he removed his shirt.

The reshuffled Panthers survived until just before the half time break when Curtly Peters made it 2-0 in the 41st minute. Michael Baptichon made it 3-0 soon after the restart, from the penalty spot, Andrew Morrison pulled one back for the Panthers, but Baptichon added a fourth, scoring his second, in added  time at the end of the game to make it 4-1.

On Sunday, the Sugar Boys won the Local derby with VG United, 5-0, with all the goals coming in the second half during some heavy rains that swept the Shirley Ground.

Mohammed Kashour scored the first goal of the game in the 47th minute and went onto complete his hat trick with further goals in the 75th and 78th minutes. Michael Castello netted in the 73rd minute and Allon Williams fired home in the 77th.

The Islanders then maintained their 100 per cent start to the season with a hard fought, but ultimately comprehensive, 4-0 win over the Wolues with, just like in the VG derby, all the goals coming in the second half.

Nano Ottley scored in the 52nd minute, Kevin Fisher added the second, rounding the outrushing Andre Gaymes in the 57th minute, Francis Primo repeated the same scenario in the 86th minute and then Montgomery Butler scored from the penalty spot in the 91st to make it 4-0.