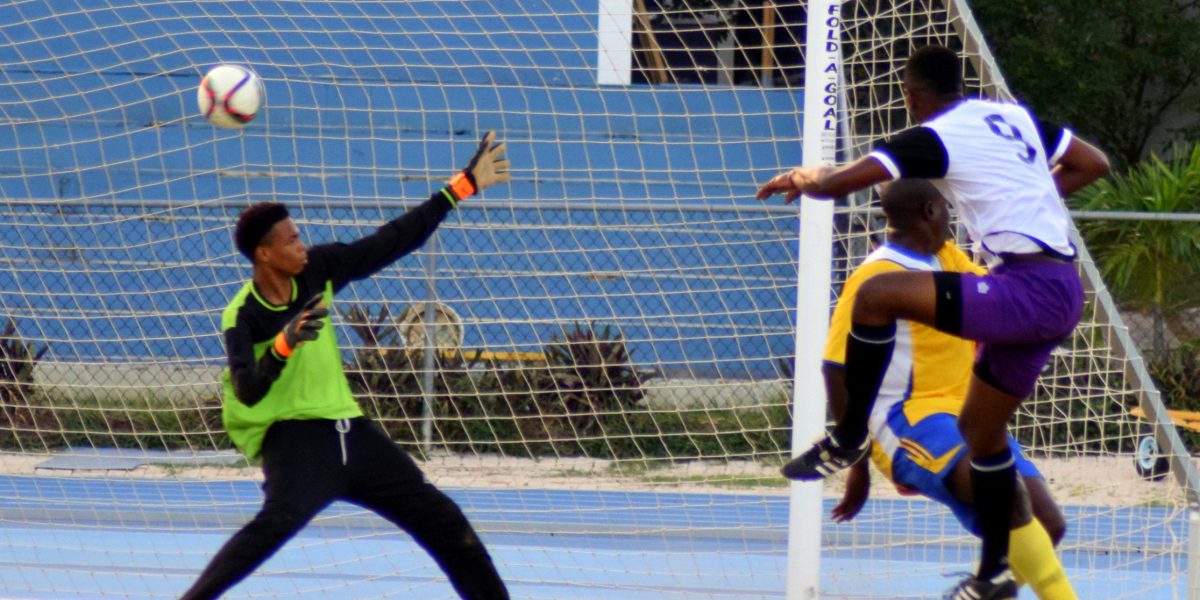 The Islanders F.C got the weekend’s action in the National League underway on the A.O. Shirley Ground, with their third straight win, 4-0, with the Panthers being the latest to be outplayed by perennial league Champions.

Avondale Williams smashed home a 25-yard half volley to open the scoring in just the 4th minute, although it took the league leaders another 20 minutes to double their advantage, mainly thanks to some heroics in the Panthers goal by young debutant, Phillip Jules.

He though was powerless to stop the unmarked Kevin Fisher from making it 2-0 from close range at the far post in the 25th minute, latching on to a cross from Marcus Lake. Jules was not to be blamed for the third goal four minutes later either, when Fisher, again unmarked, was allowed to control and had no blame as Fisher controlled Jamal Sergeants free kick and fired home.

The Panthers held their illustrious opponents at bay for almost the entire second half until Rohan Lennon controlled a long ball from Andy Davis, rounded the keeper, substitute Edgber Isaac and made it 4-0 in added time at the end of the game.

The Sugar Boys then ran out 5-1 winners of a tempestuous affair against One Love F.C.

Three Red Cards and numerous Yellows punctuated a gripping match that had seen the team’s inseparable at half time, 1-1, with Derol Redheads early opener cancelled out by a long range drive from Richard Morgan.

Lenroy Murray was the first to get his marching orders and although One Love were now down to ten men, they had a go ahead goal disallowed before Mohammed Kashour put the Boys 2-1 up in the 53rd minute. Roger Roberts made it 3-1 in the 73rd minute, before Richard Morgan was given his marching orders in the 75th, scything down Terrence Nanton in the penalty box.

Leonard Davis made no mistake from the spot to make it 4-1 and before the game was done One Love’s Craig Sinclair was also sent off for a rash tackle on Kashour.

The Wolues demolished a disorganized Virgin Gorda United, 5-1, with Kevin Carragher scoring the first with a deflected long range shot in the 5th minute. The cushion of a second goal came in the 30th minute when Leo Forte was first to react after Camille Benjamin had half blocked a shot from Xavier Arnougili.

Both teams had several chances to score during the second half and despite being reduced to ten men with the sending off of Troy Williams, Xavier John gave VG a lifeline in the 81st minute, making it 2-1. However, the Wolues were always dangerous on the break and the introduction of Alessandro Palladino paid dividends for the Wolues as he netted in the 80th minute to restore the two goal advantage. Forte grabbed his second in the 87th to make it 4-1 and Pallandino rounded things out in the 89th with his second and the Wolues 5th.

The last game of the weekend saw the Rebels maintain a 100% start to the season with a 2-1 victory over Old Madrid courtesy of two first half goals, Kevaughn Watson in the 19th minute and Howard Johnson in the 25th.

Anselm Joseph nodded home in the 51st minute for Old Madrid, but there would be no further scoring.