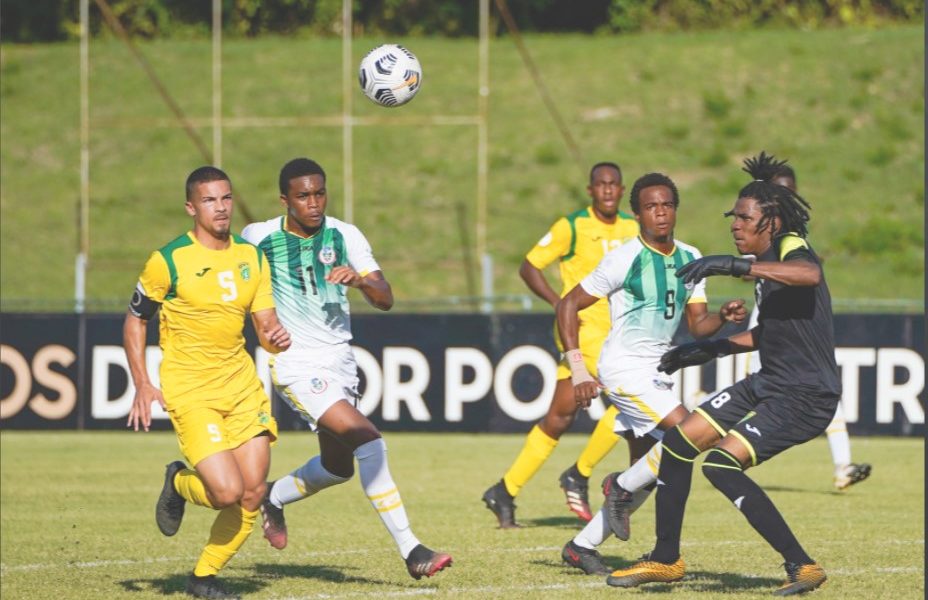 The final day of the Tournament, hosted by the Dominican Republic, began Boys closing out in strong fashion with a 1-0 win over Dominica, to take third place in Group A, just two days after picking up their first three points of the tournament in a 1-0 win versus Sint Maarten.

Jake Forbes kept his cool to put the icing on a dominant first half display shutting out distractions to fire home “Their players were trying to put me off before taking it but I’m glad I scored and hopefully I’ve done my country proud.”

Forbes was a constant threat throughout the game and was an incredibly happy young man at the final whistle “I was incredibly pleased with the overall team spirit throughout the tour. There were many positives and things that we can build on”

It was a reshuffled team that took to the field with key players sitting out through injury, but each and every one put in a real shift to knock Dominica off their stride and create many chances to score. “, the team was much more confident due to the win against sint martin and built on the positives from that game to give us the upper hand. We did have a rough start to the Tournament, but to come back and win two games is amazing” confirmed Captain, Malakai Stanners. 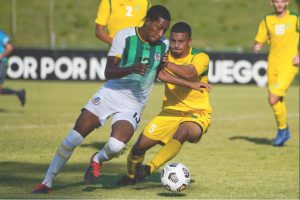 Coach Clinton” Tinnie” Percival was understandably an incredibly happy man after a long week “I am really proud of the guys, they played with pride and a never say die attitude. Even though we had to play the game without three of our regular starters, the other players showed character and the will to fight until the end”

Percival also vowed to continue the processes established and see the Boys realize their full potential “Now that they have experienced the feeling of winning at this level, I can only see them going from strength to strength and we as the coaches will do everything that we can to assist them in the progress to greater things.” 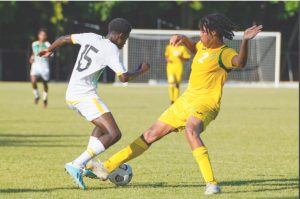 FA President, Mr. Andy Bickerton was on hand to witness the successful conclusion to the Tournament was also full of praise for the team with key players missing we knew knew we had a lot of work to do, and everyone gave 100%, all of them worked so hard and we could have won by three or four. We controlled them, did not let Dominica get into the game, we harassed them and chased them, and you know that if you work really hard, you get the benefits. “

Bickerton was also reluctant to pick out any players for special mention in such a team performance, but Mekhi Walters in goal again impressed as did Malakai Stanners , leading the team from a more central position “Stanners held the team together” confirmed Bickerton “Having won two games, got six points to finish third in our group of five and then add getting our first win a day ago and now win again today against all the odds, then you know we had great performances out there, Mekhi Walters again was great in goal, Jakes Forbes out front was just constantly causing problems. He had a great game, but you know again, it is difficult to pick out players. Malakai Stanners, Captain for the day, he held the team together, playing out of position in the centre of the defence, Justin Smith was his normal unbelievable self both backwards or forwards, but these guys played together for each other, for their country and for National pride”

Bickerton was also quick to state that the hard work doesn’t end here “We had National Coach, Chris Kiwomya here observing and helping, looking to see which players he wants to add to the National squad and obviously we have to find more competitions for this group. The players have showed him what big hearts they have and what potential they have. What we must do now is when the boys get back to Tortola, we have to work with them on the weaknesses that Kiwomya has identified.  Our Coaches will work with the players to help them improve themselves. Because if we can come out here and win two games like this in a tough group. And then go away and spend time with our players to improve themselves, then what are we going to be like when those improvements begin to show. We now understand how to play in a system, we now understand how we have to support each other, and we now understand how we have to run for 90 minutes.”

Kiwomya had used his observer role well and identified that after a tough start, the Boys had shown real desire to win “Today proved just what the boys can do. Obviously the first two games were disappointing, but with a lot of meetings and heart to heart conversations they all came out and showed desire to do everybody proud including themselves and the people on the Island, so you know I’m really proud  of them and the work they put in today as well as in both the last two games, we wanted it more than opposition.”