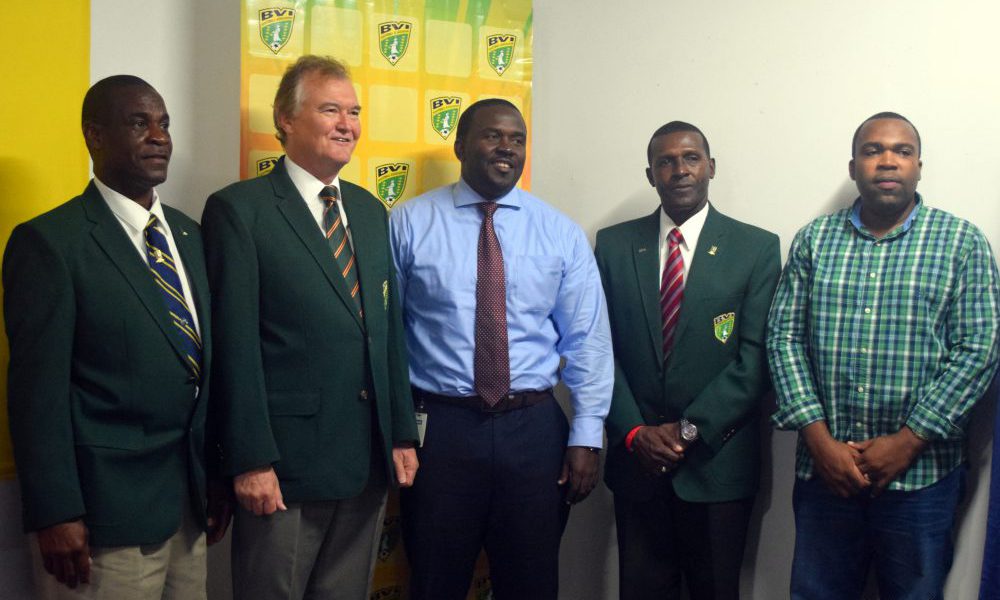 Marlon Penn joined F.A. President, Andy Bickerton on Tuesday 11th October at the Botanic Garden Office to make several new announcements regarding the East End /Long Look Stadium, that is a collaborative partnership between the V.I. Government and the BVIFA.

The project started a few years ago as a public / private partnership and has now reached the point of moving on at full steam, with the drainage, pitch and flood light installation.

As Mr. Penn stated the project also entails a six lane 400m running track, a football pitch and netball / volleyball court. Provision is also being made for F.A. Offices, changing rooms and other associated facilities.

“The Govt. has met our obligations to the F.A. “confirmed Penn “we have covered the ghuts, made improvements to the road and also worked on making an extended parking area. I want to reiterate the Govt’s commitment to the project and it has the full support of caucus, the Project has a wider implication on our development as a country and for the East End / Long Look areas well as a tourism project”

The next stage of the project includes the drainage, the pitch installation and the erecting of the flood lights.

“There have been some delays, but now we are ready to make progress” commented Bickerton” the project got caught up in upheavals at the FIFA level, but they are resolved.”

The project began back in 2013 and by September 2015 stage one was completed on time, by December 2015 the govt responsibility was concluded, the pitch consultants visited and submitted their valuations.

“The FIFA Presidential Elections of 2015 stalled the project, but the tendering process continued and contracts were awarded in April 2015. More FIFA issues caused further hold ups but by the end of August 2016 everything was signed sealed and delivered”

“we are excited because we will be able to hold our school league finals on the new site and that would be a great way to kick off our new ground. We can start to plan our football with greater confidence going forward” concluded Bickerton.”