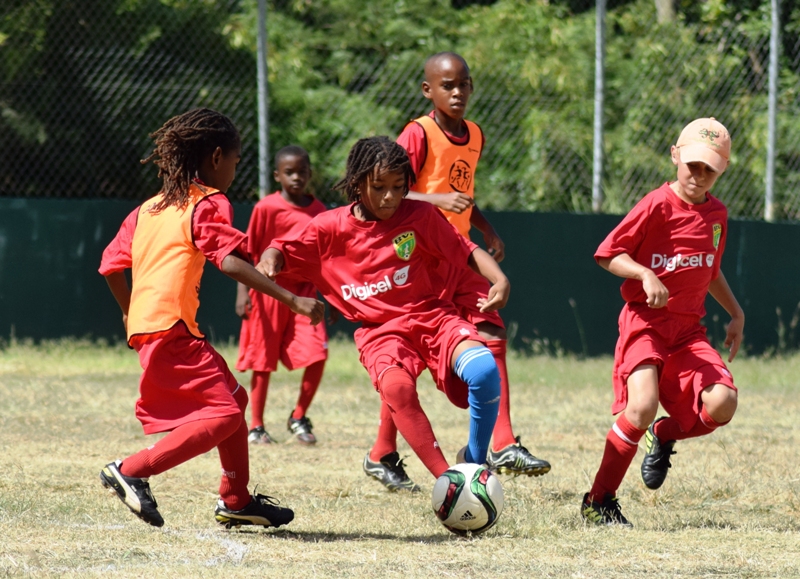 The participants of the Digicel Centre of Excellence, from both Virgin Gorda and Tortola, put on a Gala performance in front of Coaches, Piers, Family and Friends on Saturday at the Millicent Mercer Playing Field in Baughers Bay as the programme closed for summer.

The various age groups from Under 7’s right through to Under 17’s, Boys and Girls, showed off their newly honed technical skills and teamwork tactical plays in small sided games and each was viewed with appreciation from all those braving the hot sun.

Head Coach of the Virgin Gorda Centre of Excellence, Thomas Albert, was very enthused about what he saw on the day and also from what he seen over the course of the programme this year.

“20 – 25 kids have come out on a regular basis and I have seen a lot of progress, even more so, today, when I see the players I have worked with, doing so well with their Tortola counterparts. The support of Digicel has been great as have the efforts of all the Coaches and Parents.  Together we can show the World what having Digicel as Sponsors means to the F.A. and how they are supporting our youths”

In the years to come, Albert believes that those with responsibility for selecting National teams are going to have a lot of problems

“In the next two to three years there will be a lot of talented players out there. The Under 13’s, especially are looking very good and even though the girls are now in a separate programme in preparation for a Regional Tournament, they too are getting better and better”

“The Women’s league has created a pathway all the way from Grassroots to the top levels of Senior National Teams and we have looked at the U9’s and U13’s and how to get them playing competitive leagues amongst themselves, to further improve the standards. I believe we can do it and with the support of Digicel in the Centre of Excellence, have already seen increased participation and interest”

The Digicel Centre of Excellence has already produced dividends at U13 Level, when a team came back from a Tournament in St Maarten, unbeaten but in third place, following a penalty shoot out loss and still the best performance of any team the Association had sent previously

As F.A. President, Andy Bickerton explained to the participants as he thanked Digicel for its support of the Centre, the next focus is on U17 Boys

“We are delighted to have Digicel on board and today the Boys and Girls were able to showcase the progress being made with constant high level coaching. What was also important was that the U17 Boys were here and they are off to a CONCACAF Championship Qualifier in Suriname at the end of July. They are a good example to the younger players as to what can be experienced and achieved through playing football. Peers are very important to help develop and encourage youngsters in any sport and that’s why I wanted to make sure the U17 were recognized and the younger ones who go to the same schools and live in the same areas realize that the opportunity of flying off to Tournaments is there for all of them one day”

Mr. Bickerton also commented that there was much to look forward to in Football with the new stadium getting closer and closer and how important the relationship is with Digicel

“The importance of the partnership with Digicel is obvious today and they should feel proud of what they are helping to create with the development of our Youths. When we start playing on the Astro in East End, things will get even better, as the surface will enable the Youths to get even better technically and we hope the partnership with Digicel will be a long term one”