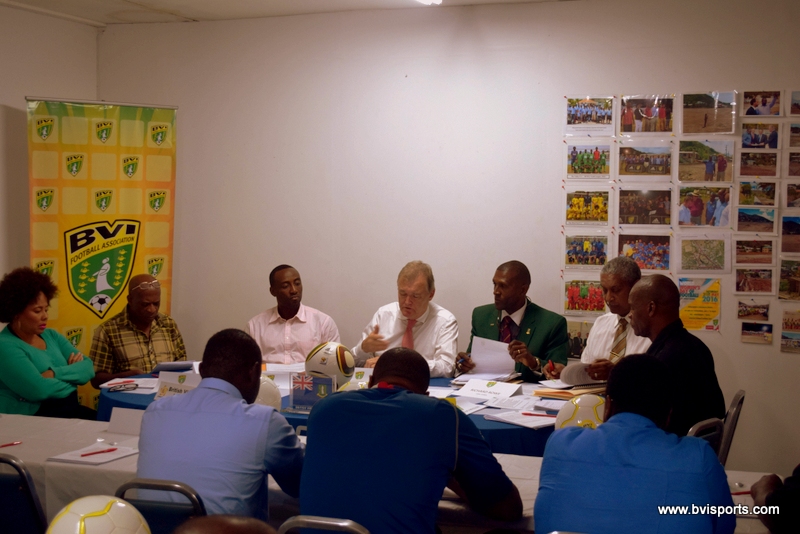 At the Annual General Meeting held at the Botanic Garden Head Office, the assembled Clubs unanimously approved the Management report of President, Mr. Andy Bickerton  and were given a breakdown of the 2016/17 Budget, which also met with approval from the floor.

Of course the main focus of attention and interest for the Clubs and Executive Members looking to retain their status was the Election of new Officers for the next four year period.

Mr. Bickerton was returned un opposed as President, but pointed out that due to age limits, it would be his final permissible term. However he stated to the Clubs that he would be giving 100% of his effort and energies into making the next four years an exciting time for football

Bickerton also noted that there needs to be improved communication with clubs and mentioned that he would be meeting one on one with Member clubs Boards.

“Thanks to god and thanks to the support of the clubs who would have voted for me if needs by, football is my passion so let’s work together and develop the game to the next level”

Mr.Avanell Morton stood for and was elected as 2nd Vice President, moving from Asst. Secretary Operations

“Thanks to the clubs for the nomination and votes, football is my life and I will work hard to take the game forward and doing the right things to help the Clubs develop

Mr. Andy Davis moves from Treasurer to Asst Secretary-Administration and felt that a fresh perspective and new blood is important and he will also bring a fresh look to the administration aspects

New Treasurer, Mr. Nick Messum, said he had enjoyed his first stint with the executive and was looking forward to working with the new team and moving football into a new era

Mr. Craig Grant eventually won election to the Executive as the Member Representative. After the first round of voting no one got a clear majority, nor did they in second round, but in the third round Mr. Grant secured the position

The various Members of the new Executive have also been given roles and responsibilities within the football family, with Mr. Morton staying in charge of Youth Football, Mr. Davis to take over as Chair of the Competition Committee, Ms. Waletrs-Abrams to assist with Youth football development, Mr. Grant to be directly involved with club development and Mr. Liburd to take charge of the Referees

It was also announced that Mrs. Juliana Luke will be taking up the role of Assistant Genereal Secretary.

Next up on the Football calendar is the FLOW Nations Cup scheduled for Sunday 17th July, 2016, on the A.O. Shirley Ground from 9.00pm.