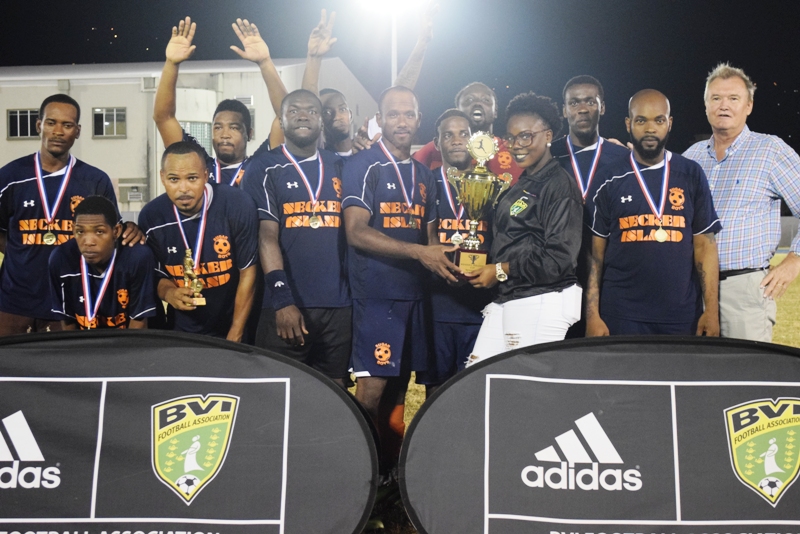 A freak own goal, conceded by Islanders ‘keeper, Monty Butler, handed the Sugar Boys the Wendoll Williams Cup for a third time in succession on Sunday 19th June, 2016 on the A.O. Shirley Ground.

The goal, the only one of the game came in the 90th minute from a cross / shot by Keron Daniel out on the Islanders left hand side. The ball looked comfortably bound for the safe hands on Butler guarding his near post, but inexplicably Butler fumbled the ball and managed to let it bounce behind him and into the empty net.

“To be honest it was a cross, but the keeper made a mistake and overall we deserved a bit of luck “ commented Daniel “

Derol Redhead was in a celebratory mood and satisfied with the win “It was an enjoyable game, we played tough and kept going until the final whistle. The goal was, maybe the break we deserved”

Terry Nanton of the Sugar Boys was named as Tournament MVP, an honor that Redhead thought was well deserved “We expect a lot from him, he pulls strings for us from midfield and once he plays his role we are all on top of our game.

Javon Carty, offered congratulations to the Sugar Boys, but felt his team should have been well ahead by half time “ we battled hard, missed a few good chances through poor finishing and then conceded a very unfortunate goal right at the death. They, the Sugar Boys played a good game and we will go back to the drawing board to plan for the next tournament”

Francis Primo and Allesandro Pallandino were jointly named as Golden Boot recipients, whilst the next Tournament could well be taking place on the new Astro pitch at the Associations soon to be new home in East End, starting in September of this year.”