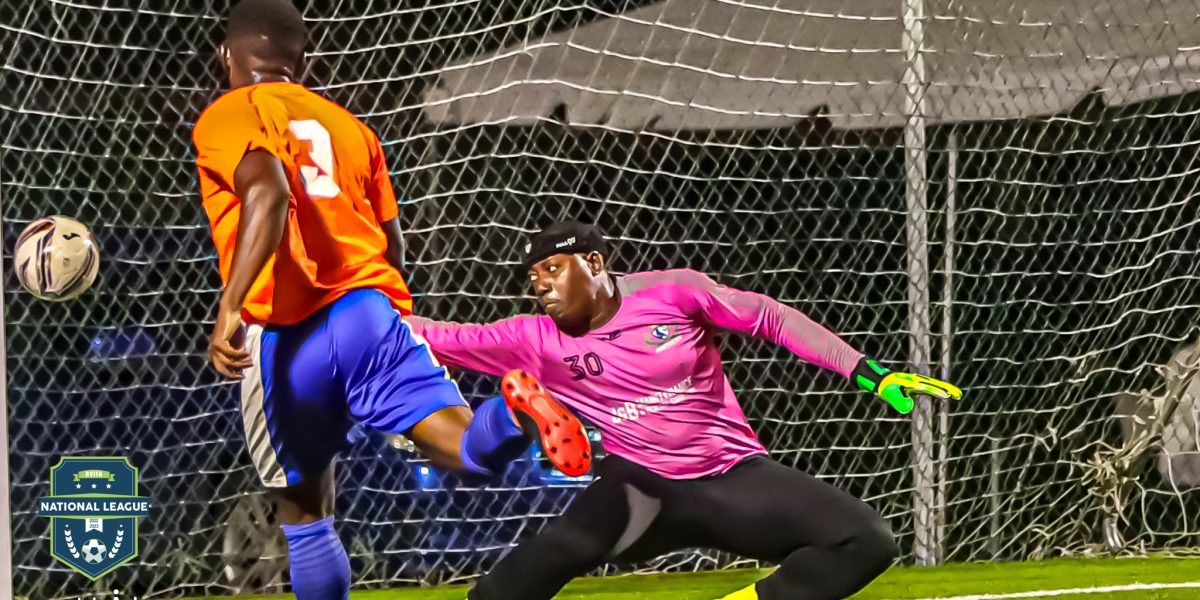 The latest round of action got underway at East End / Long Look on Saturday when One Love Utd took on Lion Heart FC and came away with a 2-1 victory.

As Manager Marc Savage noted “we came out victorious but were a bit shaly at some points and didn’t keep control of the ball or set the pace. We did improve in the second half though and deserved the win” 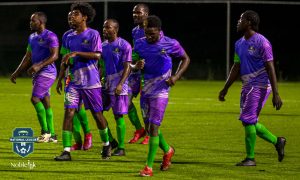 One Love took the lead in the 31st minute through Niccain Plunkett, but Shavaughn Thomas levelled for Lion Heart in the 52nd minute and it took until almost the final kick of the match for One Love to find the go-ahead goal when Collin Lavia netted the winner.

The Sugar Boys FC then kept their one hundred per cent record intact with a 4-2 victory over Panthers FC as despite conceding first, in the 15th minute to an Irwin Lewis strike, the Boys responded with three first half goals courtesy of Andres Bailey in the 27th, Clint St. Hilaire in the 37th and Alejandro Sanchez in the 45th.

Romaine Henry then made it 4-1 in the 80th, before Jhon Samuel scored what turned out to be the final goal of the game in the 85th minute to make it 4-2.

“It wasn’t one of our best performances” noted Derol Redhead “we got the win but could have scored more and have plenty of areas to improve upon. We will do whatever it takes to stay on top of the league and know the other teams will be coming hard at us, so we will work on staying focused and mentally fit”

Over on the Virgin Gorda Recreation Ground, VG Utd had a battling draw with Wolues FC as they came from behind twice to earn a share of the points in a 2-2 draw.

Luca Reich took advantage of a high defensive line to slip through one on one with the VG keeper to open the scoring in the 3rd minute, but it took VG until just part the quarter hour mark to equalize when Bernard Cumberbatch was on hand to finish a fine cross field pass.

Despite creating further chances, VG were unable to get ahead and in the 65th minute, the Wolues, having changed their formation, took the lead through Carl Morgan.

Jaden Abrams then secured a share of the points with a last gasp free kick that sent the vocal home crowd into wild celebration, with the official time showing the goal came in the third minute of added time at the end of the game

“It was a very good game” commented VG Manager, Jermain Abrams “we gifted them their goals, but we kept going and despite playing well were lucky to get a point”

Phil nelson, Wolues player/ Coach noted that “Despite going ahead early in the game VG were the better team in the first half and should’ve been ahead at half time. We made a formation change at half time which helped us a lot and we had a much better second half. Having gone ahead in the second half we are very disappointed to let the win go in the last minute. The field in VG has improved a lot since the last season which helped for a good game.”

The Islanders rounded out the weekend, bouncing back from last weeks defeat at the hands of the Sugar Boys, to garner all three points against Old Madrid, 3-0.

Robert Browne opened the scoring in the 25th minute, Roger Noel doubled the lead in the 59th and Rohan Lennon glossed out the win with an 87th minute goal.