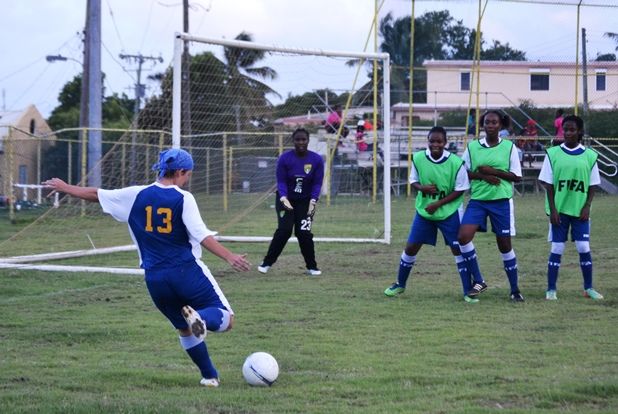 The U15 Girls cruised into top spot of the Marlon Penn Women’s Nine a Side League with an emphatic 2-0 win over the Ballstarz on Sunday 7th December at Greenlands Playing Field.

Keithreece Smith fired the U15’s ahead in the 18th minute after Lilly Pierce had won the ball from Laura Pompey and laid a perfect pass across the edge of the penalty box. The second came just two minutes later as Smith turned provider and Laresha Martin unleashed an unstoppable shot past Tevern David, deputizing in the Ballstarz goal.

In the day’s earlier game the Panthers came from a goal down to beat the Avengers 2-1.

Kelienne Smith opened the scoring in the 12th minute, taking advantage of defensive hesitation to burst through and fire home from long range past Decima Lambert. The equalizer came early in the second half when Marie Lumley charged down a Brittany Peters clearance and got the luck of the bounce as the ball rebounded into the empty Ballstarz net. An own goal by Gloria Fahie secured all three points for the Panthers ten minutes later as she deflected in a shot by “CJ” Jackson.

Old Madrid came from two goals down to beat the Wolues in Sunday’s Marlon Penn Nine A side Group B game. First half goals from Tommy Farrell and Xavi had seemingly given the Wolues a comfortable lead, butDion Clarke pulled one back early in the second half and then an error by goasl keeper Andre Gaynes handed Old Madrid an equalizer in the 54th minute.

Rodney Prince put his team up 3-2 in the 60th minute and then Bernard Grant completed the come back with a strike in the dyeing seconds.

In  Group A action, the Ballstarz saw their 100 per cent start to the campaign dented as they had to settle for a 1-1 draw against VG Utd, with Rondell Delfish cancelling out Lendale Bernard’s opener for VG.

The Tournament for both Men and Women is on Christmas break with matches scheduled to return to Greenlands on January 11th, 2015.