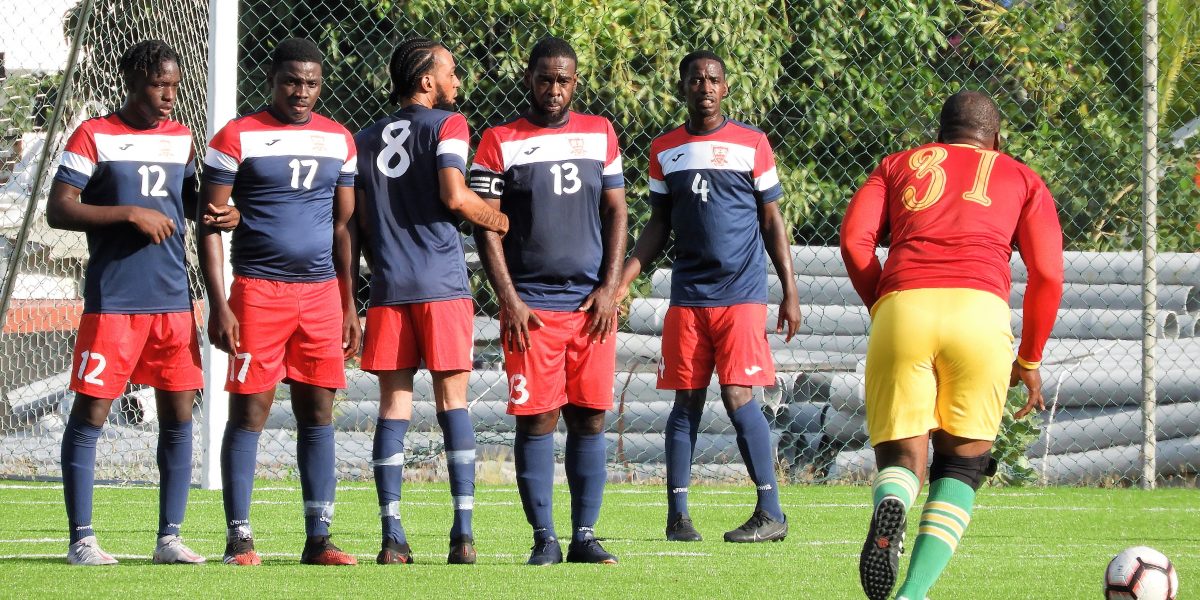 Despite all the hype and expectation of a fiercely contested local derby, Sugar Boys scored twice early (Rolland Roberts, 9th min, German Gonzalez, 18th) to dent the hopes of their rivals and then made it 3-0 (Gonzalez,31st) by the break. Despite a half time pep talk from Coach Jermain Abrams, VG Utd were unable to claw back into the game, but did at least get the consolation of an own goal before conceding two more goals, one to Alejandro Sanchez (85th) and one to Gonzalez, who completed his hat trick in added time at the end of the game, and were eventually well beaten.

“Cudos to McGraw (Baptiste) and his team” commented Jermain Abrams, VG Utd coach. “We didn’t play like a team trying to break into the top six and the game didn’t live up to the hype from our point of view. Once we conceded the early goals it was a long road back into the game and although we pulled one back (an own goal in the 50th min) we gave away to sloppy goals and we have a lot to do still to reach their standard.”

On Saturday at East End / Long Look, the Rebels FC garnered their first points of the season denting the  surging Lion Heart FC in the process with a 2-2 draw.

All the scoring came in a frenetic first half as first Lion Heart raced into the lead as Davian Doley scored in the 11th. Curtly Peters levelled the game in the 30th before Doley scored again to restore the lead in the 31st. However just six minutes later Lion Heart conceded an own goal and neither team could break the stalemate from there on in.

Also, at FA Headquarters, on Sunday, The Panthers FC dismal run continued as they suffered a 4th consecutive defeat, this time 4-1 at the hands of One Caribbean FC.

“we came into the game knowing only a win was good enough and had a game plan to control possession and take the attack to them” commented Coach Morris Mark. “Our U17’s started the game and maintained the high intensity, attacking style and the Panthers were unable to stop us.”

Nigel Sanderson scored a late consolation for the Panthers, his Golden Boot leading 10th of the season.

In the other game played, Wolues FC had a comfortable 2-0 win against Old Madrid FC who are also seeing their chances of reaching the knockout stage diminish as they have only picked up one point out of the last nine available.

Old Madrid had the better of the first half, but fell behind in the 51st minute, when Noel Maxwell latched onto a free kick from James Drury and rolled the ball past the keeper. The lead was doubled by Michael Palladino in the 67th minute as he popped up at the back post to turn in a cross by the over lapping Chris Pease.

“They outplayed us in the first half, winning every ball. However, we changed things around in the second half and played more aggressively” noted Phillip Nelson “Glady it paid off and as they have had the better of us in recent games, the win felt good.”