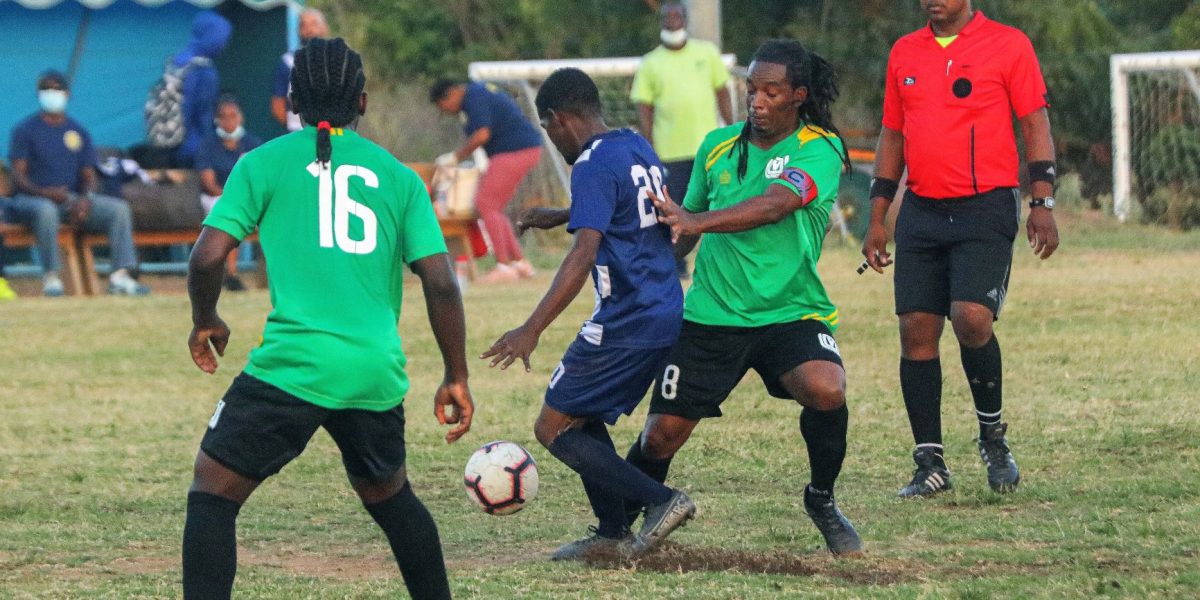 Striker Nigel Sanderson netted all three goals to take his season’s tally to a league leading 13 and his team moved into 5th place in the standings, but they face a must win game against the Wolues FC next weekend to confirm a place in the knockout stages.

“If we keep playing like we did in this game then we will have a good competition” commented Coach Wayne Phillip “Sanderson is a goal scoring machine and scored some exceptionally good goals, but we played well as a whole team.”

The Panthers were also indebted to some great saves from National team keeper, Phillip Graham who was on hand to deny the Rebels twice from the penalty spot and marshalled his defense with great skill, even when they were reduced to ten men.

Lion Heart FC underlined their Super 6 post season credentials with a 3-2 win against the Wolues as a Janel Ferdinand brace in 10th and 16th minutes put his team in the ascendancy before Noel Maxwell pulled one back from the penalty spot in the 37th minute.

Sheldon Brown extended the lead to 3-1 in the 68th minute and William Green gave the Wolues a sniff of some points with a strike in the 86th minute making it 3-2, but Lion Heart would not be denied.

Virgin Gorda United pulled to within one point of sixth place with a crushing 3-0 victory against Old Madrid FC, who stay in 9th spot.

“I’m happy with the win, but more satisfied with the way we fought for it as a team” stated Coach Jermain Abrams “after the heavy defeat last week (5-1 to Sugar Boys) we changed up the formation, bought in some youngsters and it was really successful.”

The goals all came from 16-year-olds as Sheldon Toney opening the scoring in the 26th minute before a Devante Samuel double in the 39th and 86th minutes, settled matters.

Abrams also noted that his youngsters were a bit wasteful in front of goal and should have scored more “but it’s growing pains” he said, “and we will work through them.” 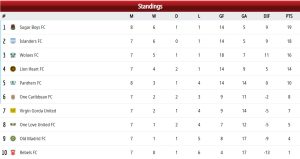 The Sugar Boys FC faced the Islanders FC in the weekends last game and saw their lead at the top reduced to just one point as they suffered a 0-1 defeat courtesy of a penalty kick in the 17th minute by Ranalie Cain.

“it was very intense and a tough game as always, but good to come out victorious” said the goal scorer.