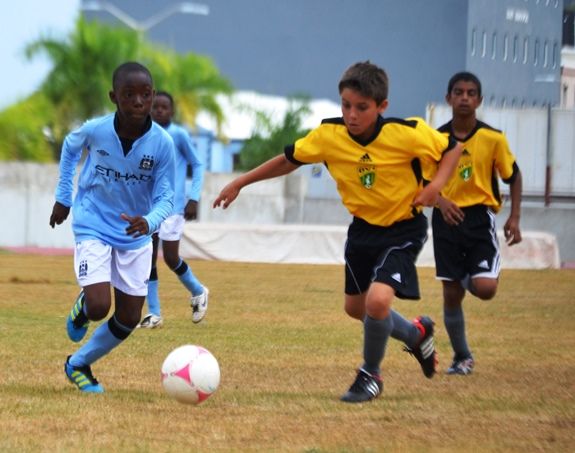 Monday 7th July, 2014 – The BVI Football Association hosted the U13 Boys from Nevis over the weekend, with matches against the BVI Rockers and BVI Babes taking place both on Virgin Gorda and Tortola. 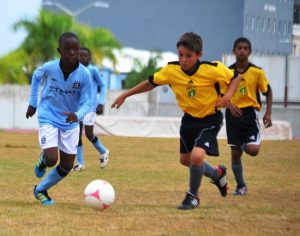 As a continuation of its progressive youth football focus, the BVIFA welcomed two U13 Boy’s teams from the Nevis Football Associations youth programme to the Territory and on Saturday two games took place over on Virgin Gorda with both ending in 1-1 draws.

On Sunday the Babes held on for a 1-1 draw and the Rockers went down 3-1 as Nevis scored twice late on.

The Nevis Boy’s were given a good run for their money by the Virgin Islands (VI), despite the Rockers and Babes only having played once before, competitively in St Martin and the Nevis players being two years into their programme.

Jamir Claxton the Nevis Coach felt pretty good and proud of all the players he had seen over the weekend.

“First of all I would like to thank the BVIFA for hosting us, they did a brilliant job. I’m very proud of our players and also the BVI’s youth players. Our players have been together for two years now and all come out of our Primary School League,” said Claxton.

The Nevis programme brings the boys together two or three times a week, which mirrors what they BVIFA is now doing with its Youth programmes.

Keith “Grell” Griffith also noted that the VI were improving and progressing under the new focus. “The future looks bright for the BVI teams; they led early in the games, but couldn’t hold on. Nevis were technically better and better organized on the field, the BVI battled hard,” he said.

Griffith and the BVIFA will be looking to arrange more matches for the U13’s going forward and continue to expand its grassroots development programmes.

“The Nevis visit was instrumental to the development of our youth programmed and a good indicator of how we compare with other similar Territories. With the exception of some players the teams were comparable and the F.A. is very pleased with how the weekend went,” commented Ag. General Secretary, Alfred Reid.

The Digicel Centre of Excellence continues every Saturday on both Virgin Gorda and Tortola and has been a key component for the technical development of the Boys who featured in the teams over the weekend.