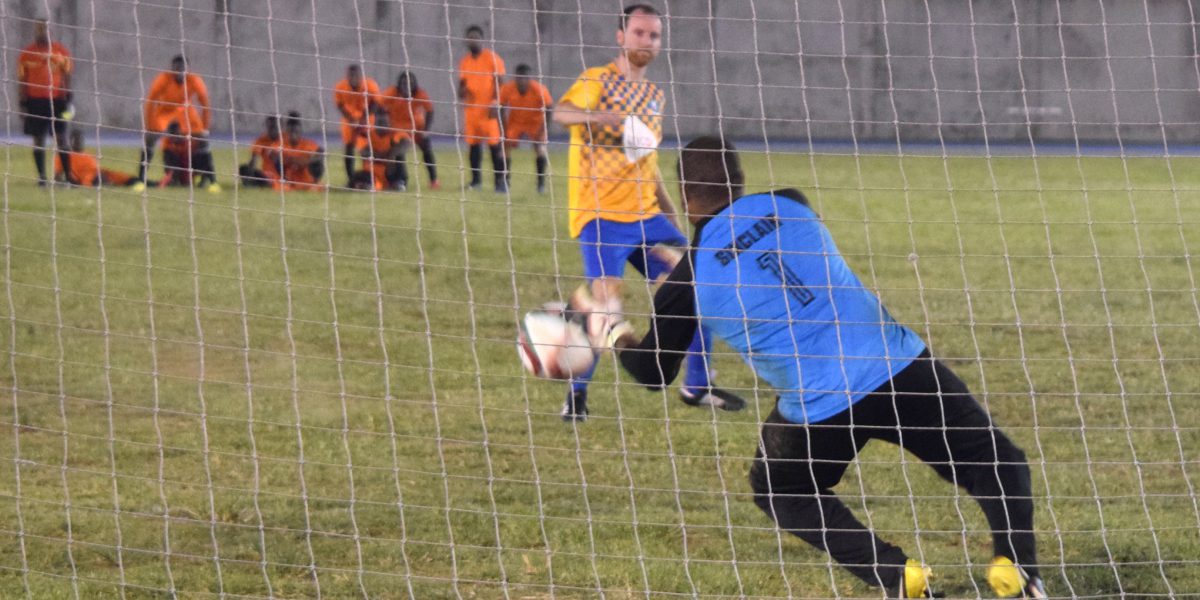 Christopher Farmer had given the Wolues the lead in the first half with a stooping clinical header and then stayed ahead, through a string of fine saves from Andre Gaymes and once or twice the woodwork, until the 95th minute.

Richard Morgan, who despite being hampered by an injury and unable to be replaced from the bench, latched onto a ball over the top, flicked it past Gaymes with his head and guided in the equalizer.

The Penalty shoot-out was all One Love as they kept their calm and were able to rejoice.

“I must commend the Wolues keeper” commented One Love Coach, Marc Savage, “we had numerous chances, but Gaymes made some great saves and the Wolues played really well. The penalties were nerve wracking and no one likes a game to come down to that, but of course we are happy to have come out victorious”

It’s not all over for the Wolues though as the Cup format is double elimination and they now await the loser of the game between Old Madrid and Sugar Boys.

the Sugar Boys started the Cup season on Saturday with a 1-0 victory over the Rebels.

The game was settled in the second half when Derol Redhead rose unmarked by the penalty spot to head home a corner from Allon Williams past Maxcell Dabreo.

The Rebels were unable to create much in the way of clear cut chances to equalise, but in the dyeing seconds Atebe Creese miscued an attempted volley from 10 yards out, which on another day could have and probably should have sent the game to Penalties.

Redhead thought his team deserved the win “we had control of the game although weren’t at a 100 per cent, as we progress we will get better and are confident of reaching the final”

On his goal, Redhead noted it was a near perfect cross and he timed his header just as perfectly to send the ball crashing into the net.

The other completed fixture saw the Islanders defeat the Panthers on a free kick from Julian Davidson.

“The Panthers were very competitive and surprised us. However, we have a lot of experienced players and withstood their pressure well. My goal was a bit lucky and probably a mistake from their keeper, but it crossed the line and a goal is a goal”

Next weekend VG Utd take on F.C. Sea Argo on Saturday, whilst on Sunday Old Madrid play the Sugar Boys and the Rebels play the Panthers