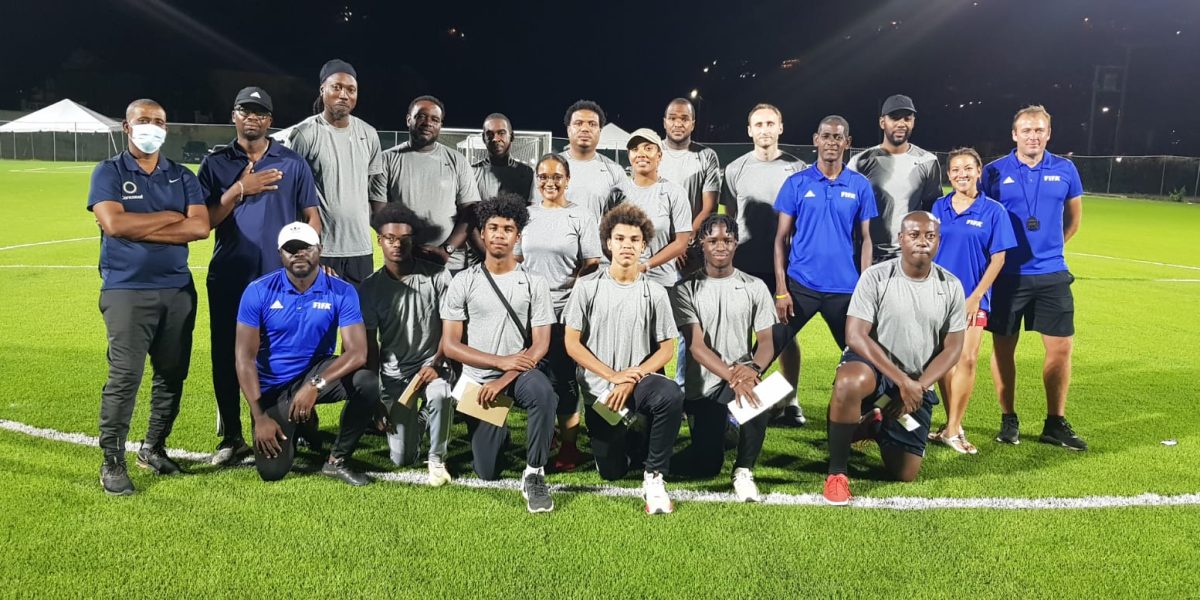 Concluded last week with Clinton Percival, Dan Neville, Javon Carty, and Anna French all taking part, and facilitated by CONCACAF’s, Lenny Lake and Anton Corneal, the FA will now be able to hold its own CONCACAF Coaching Courses.

As Neville, the FA Technical Director, noted “not only can we hold courses when it suits the local coaches, but the costs of putting on courses will be greatly reduced”

Carty commented that having people qualified to pass on knowledge in appropriate ways would be of benefit to the entire Territory “this can benefit not only Football, but grassroots systems Territory wide. Getting Coaches better qualified is especially important as coaching techniques evolve all the time and there are a lot of new ways to put across your knowledge”

Neville, who recently completed the CONCACAF “A” License course hosted by the Trinidad and Tobago Football Association and led by FIFA’s Head of Coaching and Player Development, Branimir Ujevic, also noted that “with continued education pathways being established the FA will be in line with and part of the CONCACAF Coaching Convention, which will standardize all certifications across the Caribbean Region allowing a Coach to be recognized in any other Territory”

In yet another milestone development for football in the Territory, the FA has also confirmed that FIFA has accepted the BVI into its innovative FIFA Talent Development Scheme (TDS),

This follows an in-depth audit of all the current Pathways and Development programmes put on by the FA and was undertaken by Ex England and Manchester United Coach, Steve McLaren, and John Harrower, who also has English Premier League experience.

“Their report was favourable” confirmed Neville “the TDS offers us assistance of the highest level at the elite end of the game on a 1-1 basis, so as to reduce the disparity in the level of football between different regions “

Launched in 2021 the TDS is part of FIFA’s collaborative work with MAs to increase global competitiveness. “One of our over-arching aims is to give every talent a chance,” said FIFA President Gianni Infantino. “The launching of the FIFA Talent Development Scheme is one of the keys to achieving that objective. It follows on from the ground-breaking analysis of the football talent development ecosystem in over 200 of our member associations and will give boys and girls the chance to maximise their potential.”