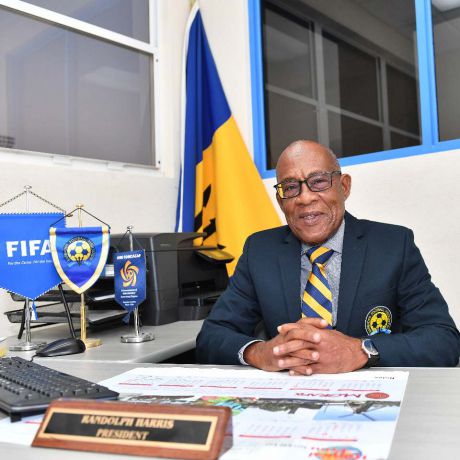 Mr. Harris was elected to serve as Board member of the Caribbean Football Union in 2016 and having been a Senior Vice President was named as acting President of the CFU after former President Gordon Dereck stood down in the latter half of 2017.

Confirming his decision to stand, Mr. Harris noted that he won’t promise any glossy manifesto outlining his policies or ideas to carry the CFU forward as he feels given the amount of football to be organized ahead of the new Nations League, “there simply isn’t time.”

However, he stated that what the Associations will get, if he is successful, is his usual unapologetic and focused commitment to the betterment of football in the Region. “For my Colleagues who have just joined our fraternity, you will notice that while I enjoy a sweet laugh and our Caribbean rhythm’s, you will quickly discover that I take football very seriously”

Mr. Harris has also vowed to engage member associations in frank and open discussions on the way forward “I invite everyone to discuss ideas beyond the “same ole, same ole” and instead talk about moving the game forward using the CFU Strategic Plan as a guide”

The Plan, recently developed by the CFU Executive has three main pillars, priorities and execution, alignment of thinking and focus as well as returning to a spirit of unity. Mr. Harris fully intends to fully engage all member associations in conversations dealing with strengths, weaknesses, opportunities and threats”

“Football remains a strong force in the sports world and is exceptionally bright for our youngsters that are talented, but we have to prepare them, not only for the world of football today, but for tomorrow’s world”