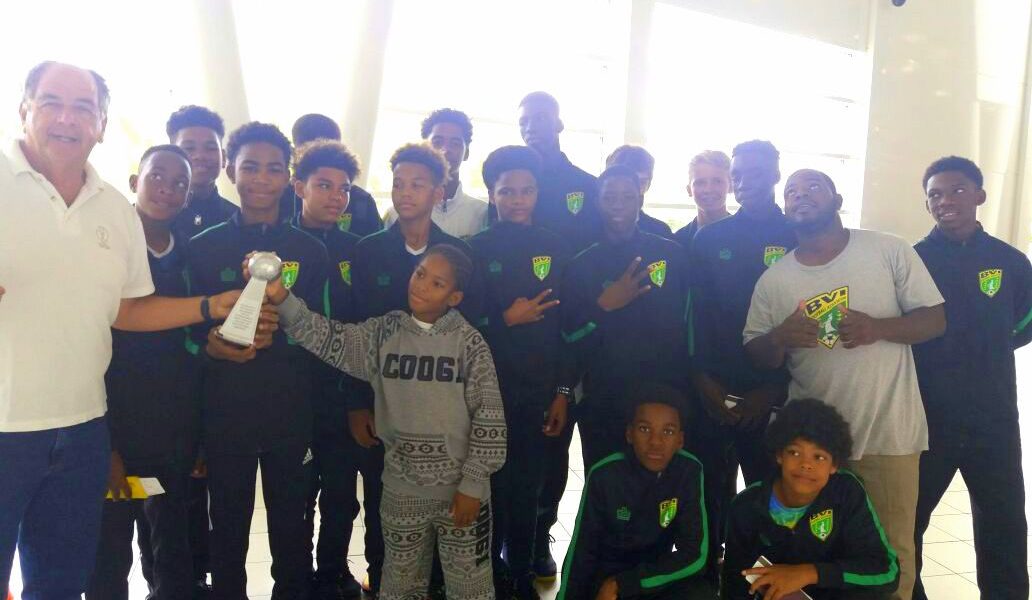 Coming home from the inaugural Soualiga Championship, on Sunday 5th June 2017, hosted by the Sint Martin Football association, the U15 National Team brought with them the Fair Play Award.

Starting play with a match against Barbados, the BVI team lost 6-0, to a much stronger, more physical and experienced team.

“We started a little nervous, let Barbados control the early stages and take the lead” commented BVIFA Technical Director, Marcos Falopa, who oversaw the team along with Assistant Coach, Richie Morton “despite the early setbacks the team grew a little in confidence after half time and created some chances with an attractive style of play, keeping the ball on the ground”

The Barbados game had begun at 8.45pm and the Boys had to be back on the field at 11.30am the next day for a game against Union Sportif Marinoise, from Martinique, but showed little sign of fatigue as they recorded a 1-1 draw, thanks to a swirling, curling goal from Luca Reich in the first half.

The Boys controlled almost the entire game, keeping the ball on the ground with some quick passing and good have doubled the lead in the second half when what seemed an obvious penalty saw the linesman change the referees mind.

The game against Guyana was like the game against Barbados in as much as the Boys found themselves outmatched by some physical and skillful players, in suffering a 5-0 defeat.

“We tried to control things and attack on the break” said Falopa “but they scored three goals in the first half and two in the second. We did look like getting on the score sheet in the second half, but their defense was strong and well organized”

The final game of group play was against Stade Lamentinos from Guadeloupe and ended 3-0.

“again, we had our chances, but in truth they were much better than us in their teamwork and determination to win” concluded Falopa

In the Medal rounds, the team took on Anguilla and came out 2-0 winners on goals from a free kick by Miquel Marshall in the first half and then Guillaume Parkins in the second half.

“the team played with much more confidence and improved technically and tactically against the more evenly matched Anguillan outfit. We also made some changes to the line-up and everything worked out well, with the players adapting and accepting new roles”

Overall Guyana were Champion’s, Sint Martin the runners up and Barbados third.

The BVI were awarded the Fair Play Trophy and Falopa was pleased with the way the team showed signs of improvement during the competition “we came home with some valuable lessons and we will now have to look at how we best prepare for future tournaments. We need to be more professional, more disciplined and get more exposure against better opposition, in order to be more competitive”

Next up for the Boys will be the CONCACAF U15 Tournament in Florida during August.