One Love Seal the Deal in 1st Place 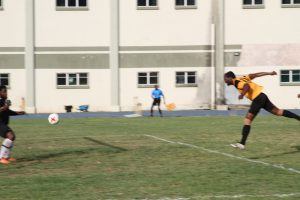 On Saturday afternoon at the  A.O. Shirley Grounds in Tortola, the two top teams in the 2018 League ( One Love and Sugar Boys) clashed with winner not only getting valuable points but with only  a few weeks left this could be the decider for One Love to prove they are the better team, or for Sugar Boys to have a chance to get in striking range of the team leading the league, One Love F.C..

The match lived up to its expectation as both teams played at a very high tempo. It was the league leaders One Love who struck first through Darren Rhodes who struck a hard right boot straight past the keeper in the 11th minute. Minutes later in the 13th minute a lovely cross found the head of Mervin Dainty, which was arguably one of the best headed goals seen in the BVI.

With a lot of pride at stake the Sugar Boys began to fight back and in the 18th minute of play  were awarded a penalty when Mohammed Kochour was brought down in the box. The penalty was converted successfully by Michael Batichon. The game got even more exciting when Richard Morgan drove a right boot past the One Love keeper to tie the score at 2-2 in the 26th minute of play. One Love went back on the attach and were also awarded a penalty in the 36th minute of play ands was also successfully converted by Leonard Davis. With seconds left in the first half Sugar Boys would make one more attack on goal but unfortunately for them the ball hit the top of the cross bar, bounced in front of the line but never quite made it into the back of the net.

The second half saw One Love forced to play with 10 men when standing referee gave Shevaughn Thomas a red card who chose to use abusive language in front of the referee after the whistle was blown for the half time. This forced the One Love team to play a more conservative game and focus more on defending their lead rather than attacking the Sugar Boys goal. The game ended full time with a 3-2 win over the Sugar Boys.

In Virgin Gorda on Sunday evening two exciting games were player. In game one Islanders F.C who are in third place came up against a seemingly revived Sea Argo F.C . Clive Williams of Sea Argo was the first to score in the 41st Minute of play and things were looking good for Sea Argo who were hoping to get a win from Islanders. The Islanders have a lot at stake and are still trying to catch local boys Sugar Boy in second place. With time getting away Paul Thomas scored the equalizer in the 50th minute  and Ronelle Caines scored the second goal for a final score of 2-1 in favour Islanders F.C.

The final game of the weekend saw the evenly matched Old Madrid F.C come up against Panthers F.C. Panthers scored first through their talented number 10 striker Nigel Saunderson early in the 5th as he scoured from a free kick after being fouled just outside the penalty area. Just before the half Old Madrid began to look more dominant and soon scored through Xavier John their number 18. Despite further attempts at goal by both sides no one else was able to score and the game ended a tame 1-1 enabling Panthers to hold onto their number 4 position behind Islanders in 3rd position.