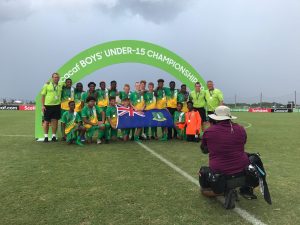 All teams are based in the Caribbean and split up into two groups with five, beginning with Group I which features Bonaire, U.S. Virgin Islands, Anguilla, French Guiana and Sint Maarten. Group J is very competitive, as Saint Martin, Dominica, British Virgin Islands, Montserrat and Turks and Caicos Islands.
Division 3 top finisher from group I and J BVI and Sint Maarten will face each other to crown a Division 3 champion on Saturday. All teams played a minimum of 4 games. The BVI have had 3 wins and 1 draw to lead the group J and settled a score with Dutch Sint Maarten who narrowly defeated them in the finals of the Richard Mill,St Bath Cup.

National Team Coach Dan Neville stated, “
A fantastic achievement by our under 15s who have managed to top the group without being beaten. After an opening day 3-3 draw with Dominica our young players then defeated Turks and Calicos 2-0, Montserrat 2- 0 and St Martin 6-1 on the way to the final.

In their most impressive game to date on Floridain beating Saint Martin 6-1. Matthew Stephenson had a double (11’, 29’), while Azarni Callwood (7’), Luka Chalwell (33’), Malakai Stanners (34’) and Oliver Brown (47’) chipped in with goals. Calixio Flanders scored for Saint Martin in the 46’.

Head coach Darren McGarry commented “I’ve been really pleased with the group and felt they’ve improved game by game. I’ve also been pleased with how the squad has coped with injuries. Obviously losing captain Michael Palladio in the warm up was not ideal but we’ve coped well in his absence, I’m hoping he will be back for tomorrow’s final. The players that have came into the line up have done well and young players Azarni Callwood and Ryan Lettsome have been excellent. We set goals at the start of the week, one of them was to reach the final but the most important one was the players wanted to improve over the week, they’ve certainly achieved this and credit to the staff for creating an environment for this to happen”

Dan Neville who is also in charge of running the rule over potential national team players of the future further stated “I’m delighted for the group and they have done the British Virgin Islands proud. In 2017 we made the final but eventually were edged out by Guyana so I’m hoping we can go one further this time around. During our recent national team camp we had 9 graduates (Chalwell, Marshall, Grant, Forbes, Medway, Rowe, Prentice, Butler and Santos) from the 2017 Florida group. I believe the tournament CONCACAF run was pivotal in exposing the players to different opposition and the challenges this poses and also it gives a great insight to life on camp and being away from family etc. From my point of view it also gives us an opportunity to set the tone for the level of professionalism we expect when the players are away. Whilst we want them to have a great life experience it is also important that we show them the values and discipline we expect when players are with us.

On the whole I am delighted with the showing and having a 12 and 13 year old cope so well optimizes the general level of achievement from all our age groups over the last year. Our speed of progress both from the players and from the point of the program is very encouraging and certainly bodes well for the future. Lastly well done to coaches Darren, Paul and Richie who have led and organized the group superbly.”