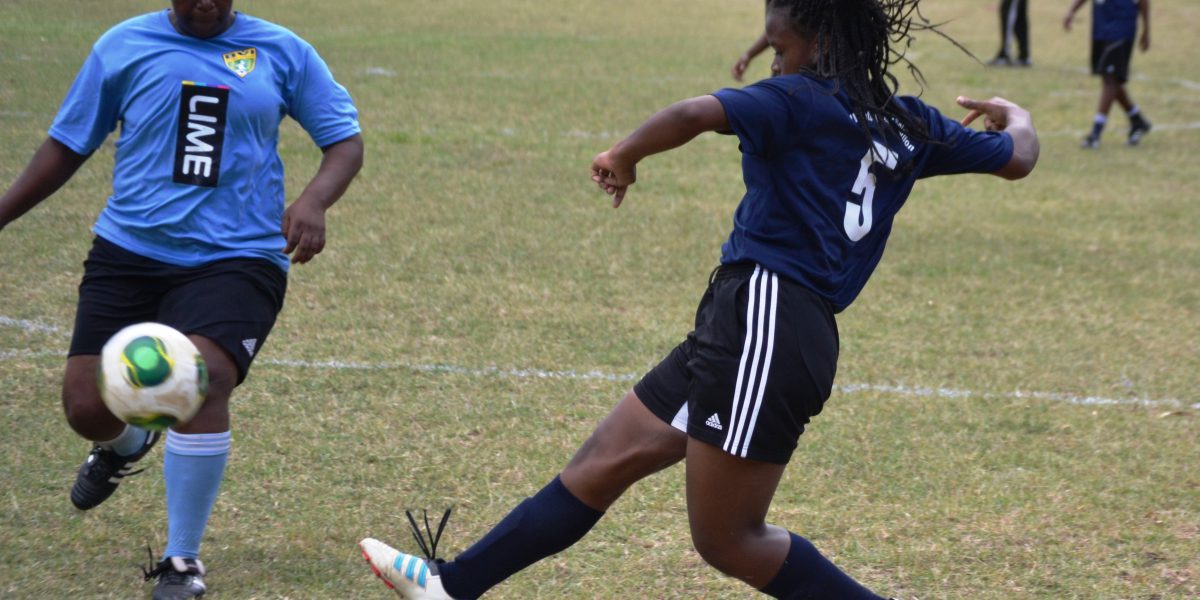 He put ESHS on the score sheet in the 6th minute before Kemron Tillack equalized in the 8th minute. Lewis then scored two further goals in the second half to make the final score 3-1.

In the Girls division BFEC beat ESHS 3-2 with Jackisha Rigobert, who has represented the Territory at U20 level, opening the scoring with a powerful drive in the 10th minute before she doubled the lead for the visitors just before half time.

Amber Penn pulled one back for ESHS early in the second half before D’Arion Williams restored the two goal advantage for BFEC. Penn then scored again with ten minutes remaining to set up a nervous last few moments, but BFEC ran out worthy winners.

SDA made the trip to BFEC on the following Thursday, February 20th, 2014, to face the Begrado Flax girls and found them in rampant mood.

Despite missing the chance to grab two goals early the SDA defence was handed a torrid time by the free running Brittany Peters and the cool finishing of Rigobert.

The game was turned on its head half way through the first period when Rigobert latched onto a loose ball in the SDA penalty area to fire home, giving Keeper Esther St Lot no chance. Rigobert doubled the lead moments later, before a brace from Brittany Peters and one from Tia Modeste made the half time score 5-0.

SDA re formed in the second half to put up a spirited fight, but could find no way past a solid BFEC defense and with Peters, a National team Goal Keeper,  again proving a handful upfront the score line became a rout.

Peters managing to find the net twice more to complete a four goal haul and make the final score 7-0.

Back in the Boys U14’s BFEC bounced back from the earlier defeat by ESHS to beat Cedar International 4-0 with first half goals from Elian O’Neal giving BFEC a comfortable lead at half time,  before an own goal and a strike from Shamoi Dore in the second half completed the win.

On Wednesday, February 26th,  2014, ESHS beat Begrado Flax 4-0 on goals from Kevaughn Watson, who gave his team a 1-0 half time lead, before doubling the advantage in the 9th minute of the second half and a brace from Timothy Lewis who scored in the games dyeing moments to make it 4-0.

ESHS then repeated the same score line on March 5th, against a combined St Georges/Seven Day Adventist team, with Maxcell Dabreo, Robert Green (2) and Tyrelle David all finding the net.

Two more games took place in the Girls League with ESHS finishing off a resounding 5-1 victory over the SDA Girls on late second half goals from Amber Penn, Esmeida Paul and Lilly Pierce after the SDA team had threatened a second half comeback.

ESHS went into the break 2-0 up on strikes from Laresha Martin and Amber Penn, but were rocked early in the second period when Taise Weatherly fired home.

SDA mounted some serious pressure on the ESHS goal, but couldn’t score the equalizer and were caught on the break to settle the points in favour of ESHS.

BFEC rounded out the action ahead of Thursday’s game (March 13th, 2014) with a 4-2 win over a shorthanded ESHS team. Peters scored twice with Rigobert and Makeda Fahie also on the score sheet for BFEC.

Thursday’s game, featuring ESHS and BFEC  is scheduled for 4.30pm at the Roger Allen Park in Sea Cows Bay, with the last Girls game before spring break being SDA against BFEC at Greenland’s on March 20th,