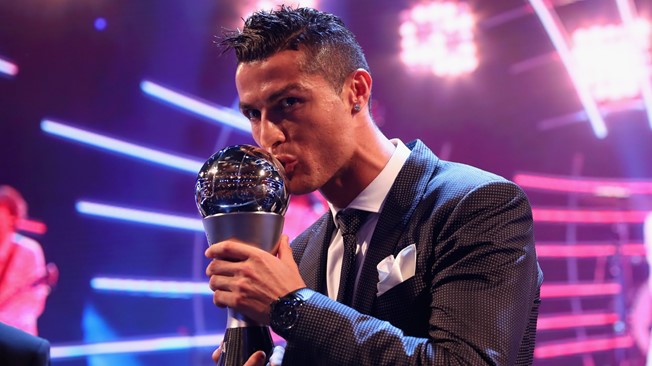 In a glittering ceremony that saw a galaxy of footballing stars descend on a venue renowned for mixing British royalty with the bright lights of the entertainment industry, the new kings and queens of football were crowned at The Best FIFA Football Awards™ in London.

Cristiano Ronaldo and Zinedine Zidane were awarded the leading honours for The Best FIFA Men’s Player and Men’s Coach respectively, with the Portuguese being named The Best for the second successive year. Dutch duo Lieke Martens and Sarina Wiegmanwere rewarded as The Best FIFA Women’s Player and Women’s coach.

Despite approaching his 40th birthday, Gianluigi Buffon proved that age is just a number by being named The Best FIFA Goalkeeper, with the Italian custodian on hand to pick up the inaugural award to celebrate the men between the sticks.

After picking up The Best FIFA Goalkeeper, it was no surprise that the Juve and Azzurri stopper was also named the top goalkeeper by his peers, in a FIFA FIFPro World11 dominated by Real Madrid players. Cristiano Ronaldo was joined in the star-studded XI by club team-mates Sergio Ramos, Marcelo, Toni Kroos and Luka Modric, with Dani Alves, Leonardo Bonucci, Andres Iniesta, Lionel Messi and Neymar completing the dream team.

Fans from around the globe voted in their hundreds of thousands for the Puskás and FIFA Fan Awards, with Frenchman Olivier Giroud the ultimate winner for the former thanks to his superb ‘scorpion kick’ goal scored for Arsenal against Crystal Palace in the English Premier League. Celtic supporters scooped the second Fan Award, thanks to their stunning 360-degree card tribute to the ‘Lisbon Lions’.

In an evening sprinkled by show business, with star of small and large screen Idris Elba hosting proceedings, it was a true story fit for Hollywood that saw the FIFA Fair Play Award handed to Francis Kone. The Togolese forward saved the life of an opponent by administering on-pitch first aid after a collision – the fourth time he had saved a player’s life on the football pitch.

Musical entertainment was provided by Stomp and Kasabian, the latter of whom brought the house down with a performance of “Ill Ray”. It is certain that in more than a century of hosting star-studded occasions, the London Palladium has never seen a night quite like this one.