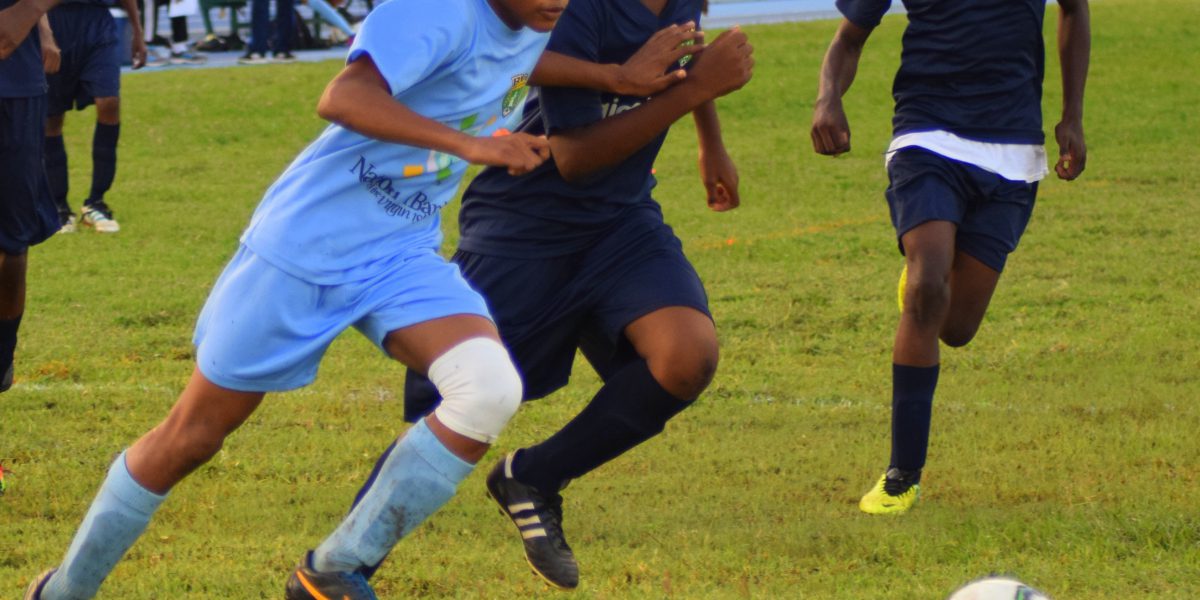 In the BDO Primary U7’s, Montessori School are top of the standings, but only on goal difference from Cedar School “Green”, having won both their games played so far and with the league’s top scorer, Charlie Potgeiter (5) in top form.

Begrado Flax sit in third place and would have hoped to have gone top in their latest game, against the Seventh Day Adventist School. However, as it turned out they were indebted to a late equalizer from Drekailly Findlay to share the points. Findlay had also cancelled out Nazri Jones’s first half opener, before J’Lynn Penn made it 2-1 to SDA at the break.

Findlay secured the point with his 18th minute goal to make it 2-2.

In the U9 Division, Group A, there has been little action so far, but a 3-0 win for First Impression’s against Joyce Samuel Primary sees them sit atop the group.

In Group B, Robinson O’Neal Primary and Cedar School “White” have identical records to sit one and two in the standings, as they both beat St Georges and Pelican Gate, 2-0, respectively.

Meanwhile in the U12’s, Cedar “Green” got their campaign off to a winning start, 3-1, against Begrado Flax, courtesy of goals from Ryan Lettsome, Azarni Callwood and Nici Haycraft. An own goal briefly made it 1-1, but in the end the Green’s had too much firepower.

Alexandrina Maduro Primary are unbeaten at the top of the Group with two wins from two, with the latest being a 3-0 romp against Pelican Gate, as Felix Walters scored twice and Keryan Provost once.

Joyce Samuel Primary moved into second place with a 4-0 victory against Leonora Delville Primary, thanks to a hat trick from M’Khori Crabbe and a goal in the just the third minute from Jesse Cockburn.

Most of the High School action has been in the U14 Boys Division, which sees Elmore Stoutt High currently pipping Begrado Flax to the top spot on goal difference.

The pair shared nine goals in their first clash of the season with ESHS holding on to win 5-4 with Johnathon Jarris putting the hosts up 5-2 before a late onslaught from the Virgin Gorda boys saw them pull it back to 5-4 with a few nervous moments left to play.

Marcus Butler, Sheldon Harry and Jeremy Grant all scored for ESHS in the first half, whilst Division top scorer Jahdique Winchester (7), pulled one back before the break for BFEC. In the second half Shamari Maduro made it 4-2, T’Khoi Richardson then made it 4-2, Jarris 5-2 and then both Winchester and Richardson netted again to almost secure at least a deserved point.

St George’s are in third place as they put defeats to ESHS (2-5) and BFEC (3-4) behind them to beat District 3 rivals, SDA, 3-1, with goals from Guillaume Parkins and Jalen Prentice (2)

In the High School Boys, Open Division, BFEC beat ESHS, 2-0, in the only game played so far, thanks to goals from, yes you guessed it, Winchester and Sheldon Toohey.

In the Girls Division, SDA held on to beat St Georges, making their debut in the tournament, 2-1, after Sheniece St Jean had scored from the penalty spot. However earlier goals from Marline Daguiar and Neemie Odvil provided just enough of a cushion