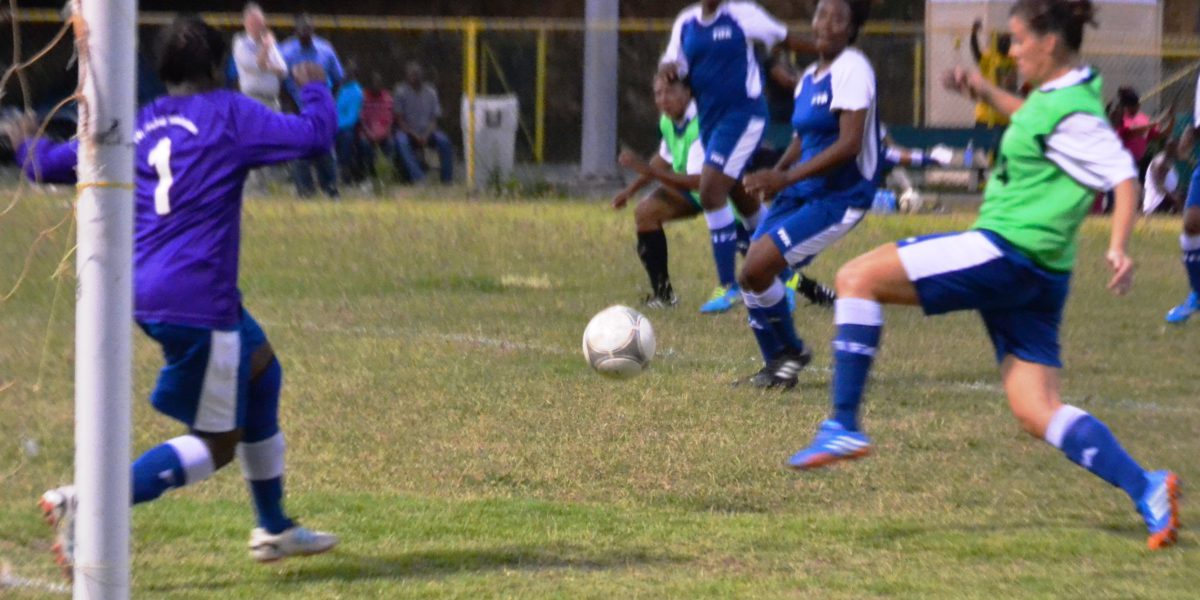 Sunday 25th January, 2015 – With an emphatic win, but by the narrowest of margins, the Panthers F.C. leap frogged the U15 Girls team to grab the BVIFA Marlon Penn Nine a Side Women’s league Championship trophy at the Greenland’s Playing Field. 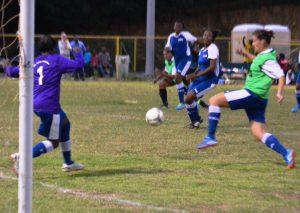 Ali Hamilton scored the all important 7th goal for the Panthers, which gave them the title on goal difference from the U15 Girls the Panthers pose with Marlon Penn and the Championship Trophy

Going into the final round of matches any of three teams, the Ballstarz F.C, the U15’s and the Panthers F.C, all had a mathematical chance of being Champion, with the U15’s sitting in prime spot three points up on their nearest rivals.

The first game of the day saw the Ballstarz play the shorthanded Avengers, but after racing into a 3-0 lead just before half time, they saw their chances of recording a big win and boost to their goal difference evaporate as an injury to an Avenger player and her subsequent inability to continue playing, gave the Referees no option but to abandon the game.

The injury took the Avengers down to just six players, with the rules stating at least seven must be on the field for the game to continue.

Murcella Gordon slotted home the opening goal after intercepting a clearance and firing home into the empty net. A neat interchange between Emily Lockhart and Tevern David resulted in a pin point cross to Victoria Medley Parkins, who smashed home the second and then David herself made it three with a well placed shot from outside the penalty area.

The U15’s then played the Panthers, knowing a point or even narrow defeat would guarantee them the Trophy, but the experienced Panthers had a much different idea.

After several near misses at either end, the Panthers opened the scoring half way through the first half when Amanda Creese nodded in from close 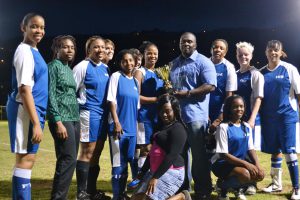 Hamilton scored her second and the Panthers fourth just before half time, calmly lobbing the ball over Keithreece Smith, deputizing for the injured Phillip.

At the start of the second half Laresha Martin brought out a fine save by Decima Lambert and Gabby Dawson saw her Free Kick blocked by the defense as the Girls took the game to the Panthers. However they would suffer more heartbreak when Hamilton rounded off her hat trick in the 35th minute with a low drive and then Nicky Wheatley hit her lobbed effort with just enough power and bounce to leave Smith unable to stop the ball crossing the line in the 40th.

At 6-0 the goal difference for both teams was identical as were the points total, but Hamilton scored her fourth in the 45th minute to make it 7-0 and despite the U15’s striving for a goal that would have denied the Panthers the Championship, up until the final whistle blew, the strike proved decisive in the destiny of the Trophy.