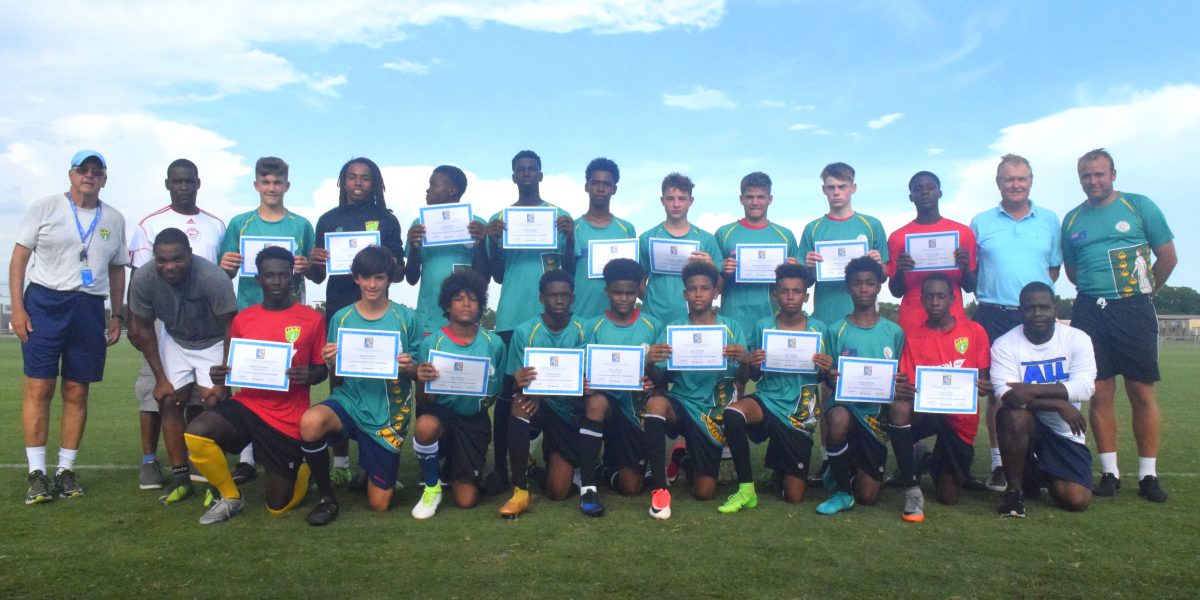 The first half was an evenly matched affair, with perhaps the French Guyana team a little wasteful in front of goal, but the BVI also had chances to score and who knows how different the outcome would have been if a late one on one with the keeper had gone in for the BVI.

As it was the BVI Boys had given their all to match the French Guyana team who appeared fitter and had a slight technical edge and despite making several changes during the second half to stem an ever increasing flow of attacks, the Boys wilted in the heat of the day and conceded six goals.

Fishing as Group J Champions, in itself was beyond the hopes of even the most ardent supporter or parent, of which several made the trip to the Tournament and to end as runners up in Division 3 a great performance as Captain, Guillaume Parkins noted “They were fitter definitey, but we had a few opportunities that just didn’t end up in the back of the net. We could have played better overall, but I am pleased with how we did and it is what it is. We need to move the ball quicker, get fitter and come back stronger, but take nothing away from us as we had a great Tournament”

In earlier group play the BVI Boys beat Montserrat 8-2 as Bailey Rowe again led the front line with skill and an insatiable desire for goal, netting four times in a first half onslaught that also saw Tyler Forbes scoring twice and Luka Chalwell once.

Coming out of the first half break leading 7-1, the Coach was able to rest players and protect those on yellow cards from possibly missing out on the final game.

Marcus Butler added another goal though and the final score was 8-2.

Goalkeeper, Alexander Keen, who has had virtually a ringside seat for the big victories, was also full of praise for the team “the team has done really well, especially scoring 19 goals in three games, that’s pretty impressive at any level”

Keen was also keen to note that he had three assists in the victory against Montserrat and was quite happy with his “worldly pings”, which is smashing the ball as far as you can and hoping the forwards latch onto the ball and do something with it, like scoring goals.

The Turks and Caicos team were soundly thrashed, 7-3, even though the VI Coach, Marcos Falopa, made four changes to the team that started the 4-0 win over Anguilla, the new faces quickly put any doubts about the result to rest with a dominant display.

By half time the VI were already 3-0 ahead after goals from Charles Medway (2) and Bailey Rowe.

Rowe would then make it 4-0 from the penalty spot early in the second half and complete his hat trick the other side of a Marcus Butler goal to make it 6-0.

Several substitutions ensued and the Turks and Caicos boys pulled a goal back before Kahil Farrington made it 7-1 with a powerful header.

Farrington noted that he was surprised to score. “I knew I made good contact, but didn’t realise it was going in. We have now had two good wins and should make it to the finals.”

The Tournament began for the BVI with a comfortable 4-0 win over Anguilla.

The game, played in blistering heat at the IMG Academy in Bradeton, Florida, began at a slow pace, but it was the BVI Boys who were soon in the ascendancy as after a spate of chances that went begging, Miguel Marshall fired home to open the scoring.

The BVI lead was soon doubled as Tyler Forbes rose high at the far post to get his head to a Luka Chalwell Cross.

Forbes then made it 3-0 early in the second half as he surprised everyone, spinging the off-side trap and flicking the ball past the Anguillan goalkeeper.

Number 4 came from the boot of Marcus Butler and the game was all over.