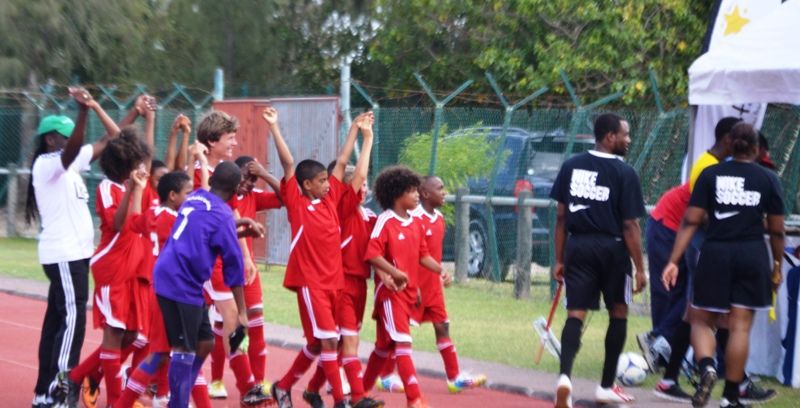 Sunday 20th April, 2014 – As the Saint Martin Football Association U13 Boys Tournament concluded at the Stade Alberic A. Richards, Saint Martin, the BVI Rockers went undefeated in their two remaining group matches, suffering the heartbreak of conceding a late, late equalizer against the Risk Takers from St Maarten in the last game to miss out on a semi final berth. 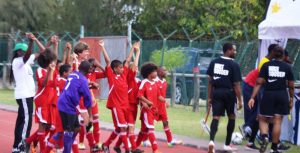 Saturday’s action in Group B had begun with the Rockers facing St Martin Sud and from the first whistle the Rockers dominated their larger opponents with skill and speed.

Luka Reich went close to opening the scoring following good combinations of passing from Guillaume Parkins and Luka Chalwell. Marcus Butler was proving a handful down the right flank, skipping through challenges and launching a series of dangerous crosses.

Reich saw a shot on the turn from a Liam Blok free kick turned away by the keeper and just out of the path of Chalwell, who also saw a powerful free kick from just outside the box beaten away.

The sides reached the break still deadlocked, but in the 2nd period the Rockers finally got the goal they deserved when Parkins finished off a great flowing, inventive move, involving 3 or 4 BVI players, with an unstoppable shot.

Looking completely in control the Rockers were then stunned when the Referee awarded a penalty late on for what seemed an innocuous challenge and Daniel Gilford had no chance, beaten by a well taken kick that flew into the net.

A 1-1 draw against the more fancied team certainly got the crowd murmuring about the BVI and even better was to follow in the next game against the Risk Takers, although it would eventually end in heartbreak.

With a win the Rockers would have reached the semi finals and for almost the entire match it looked like that would be the case as once again the youngsters, growing in confidence and experience with each match they played took the game to their opponents.

Marcus Butler almost opened the scoring with a long range lobbed shot that was only inches too high and Reich saw his goal bound effort blocked on the line.

The Rockers defense was also playing its part with Blok a tower of strength and Gilford alert to any danger in goal.

The Rockers made the break through when Butler latched onto the loose ball after the Risk Takers keeper had only been able to half save a Chalwell effort and fired home from close range.

The Rockers were dominating play and Butler should have doubled the advantage, firing wide from the BVI left and then, with just a few seconds remaining, the Rockers suffered the cruel nature of the game when a harmless long Risk Takers clearance caught the wind and bounced over the surprised Gilford to nestle into the goal.

The points garnered from the two drawn games meant that the Rockers would face Lazara F.C. from St Thomas to decide 5th and 6th place overall and even though many teams would have let their heads drop after going so close to a semi final place the Rockers played the game of their lives to rout their opponents 4-1.

Reich sublime half volley from 20 yards out had given the Rockers a 1-0 half time lead and in the second half they really turned up the heat, scoring their second via the boot of Miquel Marshall, the third direct from a Parkins corner and the fourth, a fantastic solo effort from Hash Banthia.

The Babes also had a good day, but didn’t get the results their play deserved as they bowed out of Group A with a 1-0 defeat by Lazara and a 3-0 defeat to Club Franciscain from Martinique.

The Babes would end up in 8th place after a 2-0 defeat by St Martin Sud to conclude their participation.

The Final turned out to be a tense affair between Eucalyptus from Guadeloupe and Club Franciscian from Martinique, which was only decided 2-1 after a penalty shootout, by Club Franciscian. 3rd place went to St Martin’s Risk Takers and 4th to St Martin Nord.

The team fair play award was given to the Lazara Club from St Thomas and the Best Goal keeper Trophy was picked up by the safe hands of Daniel Gilford of the Rockers.