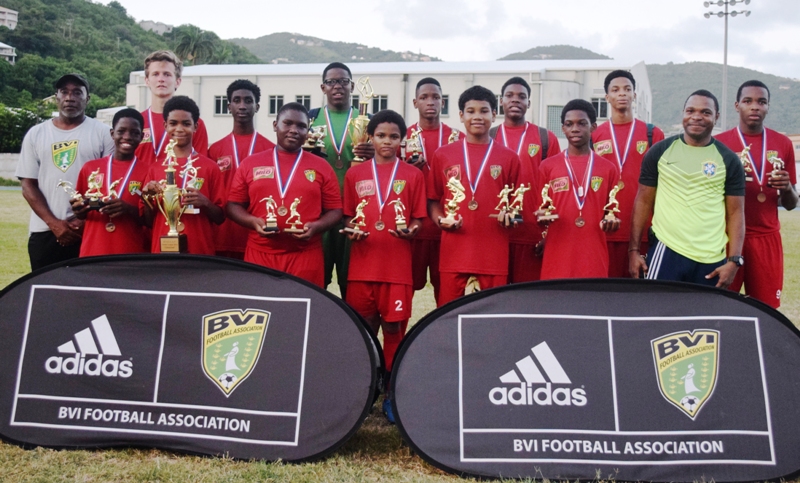 Whilst Road Town were dominant in the early exchanges they could not make the all important breakthrough and North Sound always looked dangerous on the break. However the introduction of Phillip Jules into the Road Town midfield brought Coach, Lenroy “Left” Henry, instant success and some relief when Jules rose unmarked on the edge of the six yard box to put his side ahead.

From that moment it wasn’t quite all one way traffic, but Road Town grew in confidence and scored again through Sheldon Harry. Marcus Butler also fired home to give Road            Town breathing space and in the second half Harry notched his second and Liam Blok rounded out the 5-0 win, sliding home from close range.

“We had been practicing and put in place what we had practiced” commented Coach “Left” “we looked much better as a team today and played the way I always wanted them too. Their quick breaks gave us some concern early on, but the introduction of Phillip Jules changed things around for us and he even got his head on the ball to score the opener”

Coach “Left” was also full of praise for young Sheldon Harry, who he feels is coming into his game after some stern words on the training ground

“I was looking for a performance like today from him all season. He is growing up as a player and once he keeps working hard, then he will get better and better”

Phillip Jules was named as MVP for the Final and received a gift voucher from Amazon.com, whilst at the Trophy Presentation ceremony for both the Cup and League, other awards went to Sheldon Harry and Liam Blok as Golden Boot recipients, Diego Jiminez as Golden Glove, Miquel Marshall and Devante Samuel of North Sound F.C. the Cup and League MVP’s, Justin Smith, the overall Best Defender.

Kyreek Gardiner was named as Man of the Match for the 3rd place play off between West End F.C and the Valley F.C after inspiring his team to fight back from a goal down against West End and take a 2-1 lead, before they conceded a penalty in the dyeing seconds, which Guillaume Parkins miscued, but saw bobble its way into the net, to send the tie to a penalty shoot out.

Morgan Creque had put West End up in the 15th minute, but there wasteful approach in front of goal cost them dear when first Gardiner equalized on a fast break and then Kimron Tillack made it 2-1.

In the penalty shoot out it all went wrong for West End from the start and although the Valley missed a couple of attempts as well, it was left to Joshua Ramprasad to fire home the winner.