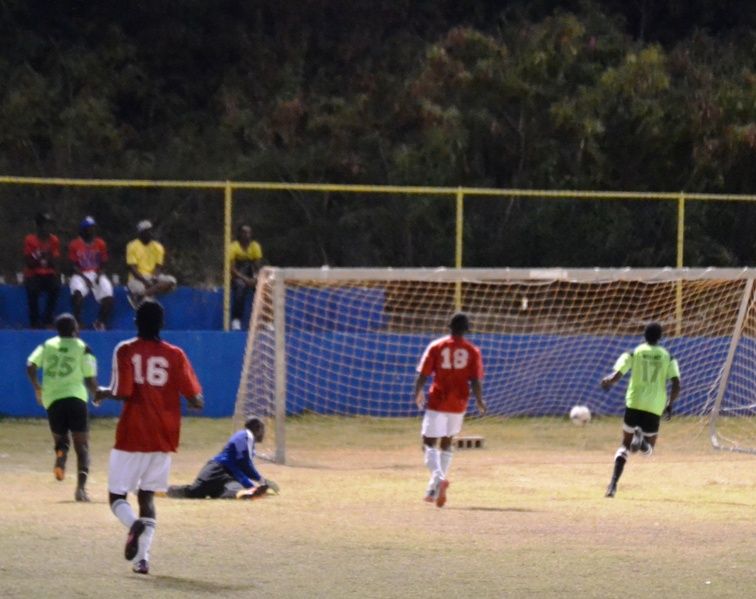 Sunday 2nd March, 2014 – One Love, with goals from Odain Reid and Richard Morgan, overcame the Islanders 2-0 to win the BVIFA Hon. Marlon A. Penn nine a side Tournament that was played on Greenlands. 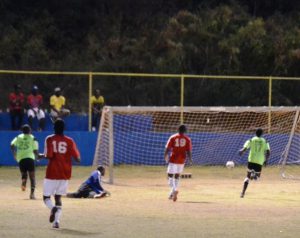 Both goals came in the first half and gave One Love F.C. enough breathing space during a second half onslaught by the Islanders F.C to hold on for 2-0 victory in Sunday’s Marlon Penn nine a side tournament played in front of a large crowd.

“It’s the first trophy in a couple of years” commented Richard Morgan “and I’m quite pleased with the team effort tonight to get the win.”

Morgan, who powered home a header from a corner, past the despairing dive of Monty Butler, also praised Wallace who once again put in a tireless effort upfront without, on this occasion, getting on the score sheet.

“He is a good forward, who scores goals and that’s what we have needed,” said Morgan.

Reid, who opened the scoring, reacting first at the far post, to latch onto a through ball, was also happy his team had come out victorious.

“It was a great win, the team played excellent and we really deserved it tonight.”

Despite matching the One Love side for hard and strong tackling throughout the game, the Islanders grew increasingly frustrated by the speed and skill of One Love and the manner in which they were being closed down.

The smaller pitch dimensions and a hard and fast surface gave neither team much time to control the ball and although One Love shared greater possession and ultimately scored the goals that mattered, the Islanders will rue several opportunities to score, with Valdo Anderson, Rohan Lennon and Nano Ottley all going close.

During the second half the Islanders inability to get on the score sheet was reaching boiling point with a couple of loud shouts for penalties going unanswered by the Officials not helping.

As the remonstrations from their bench got more vociferous a projectile apparently was thrown toward the Referee and with moments to go the game was blown as over.

FIFA Regulations clearly state a referee struck by a projectile may terminate the match and whilst a full report has yet to be received by the BVIFA, whatever the perceived reason, it is a serious matter.

Despite the unsavory and unnecessary premature end to the game , One Love and the way they played, with new Striker and target man, Jovan Wallace a constant threat upfront, were deserved winners on the night and will go back into Premier ship action with renewed belief that they can add to their silverware cupboard.