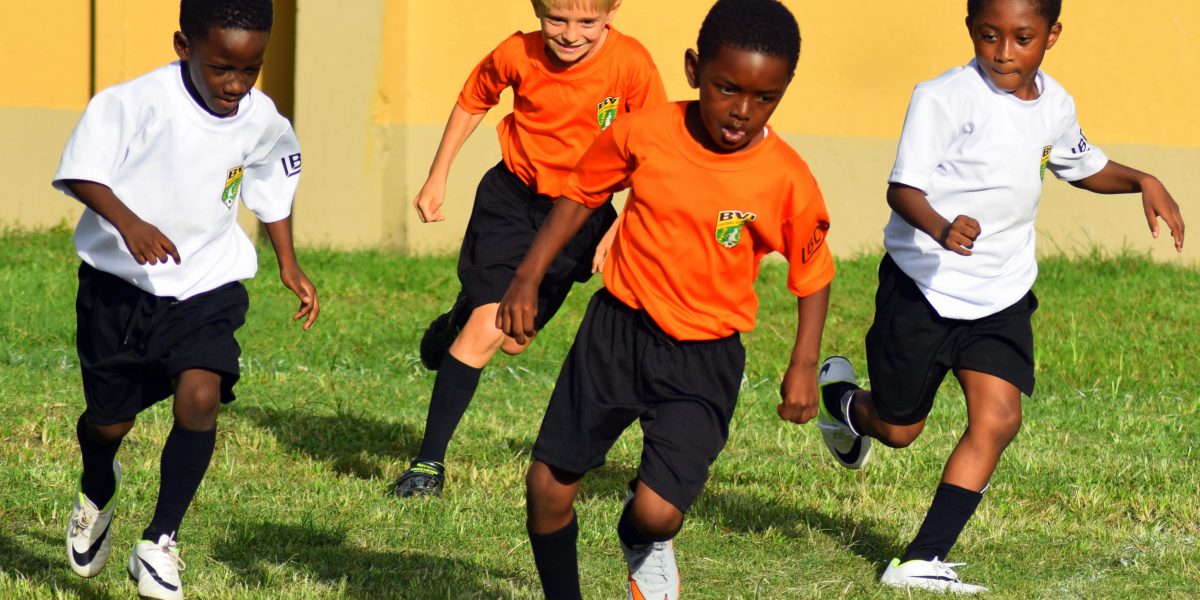 In featured games across the BDO Primary and BVIFA High School Leagues in the past week, First Impressions U7’s made it two wins from two, Seventh Day Adventist School got off to a winning start in the Under 9 Group B and Elmore Stout High School Open Boys recorded their first win of the season.

In the U7’s BDO League, Myles Penn scored all four goals in the victory over Agape, who got a consolation strike from Kecdlum Louie.

Meanwhile Cedar Green stay atop the group despite being held to a 0-0 draw by Enid Scatliffe Maroon and Montessori grabbed second place, just a point back, with a 11-0 victory over Enid Scatliffe Red.

Charlie Potgeiter netted seven of the goals, whilst James Davies scored a hat trick and Lochan Geyser the other one.

The ESPS Maroons beat the Seventh Day Adventists thanks to a lone strike from N’Sean Woods, but SDA returned to winning ways with a 3-1 victory over ESPS Reds, with goals coming from Shawn Hodge (2) and Nazri James.

In the BDO U9’s, Group A, First Impressions stay top after Logan Titley scored the only goal of the game against Alexandrina Maduro Primary, but Cedar Greens 2-1 win over Althea Scatliffe put them second, thanks to a goal apiece from Blake Kirk and Robert McKensie.

In Group B, Robinson O’Neal are still unbeaten following a 2-0 victory against SDA, with Jadon Quashie scoring both, whilst SDA rebounded with a 4-2 over Montessori to be in second place.

Kevaugn Glasgow scored a hat trick and Jordan Joseph the other, whilst Sam Potgeiter netted twice for Montessori.

In the U12’s, Althea Scatliffe leapfrogged over Begrado Flax to claim top spot with a 2-0 victory against Joyce Samuel Primary, with goals from Johari Lacey and DeAndre Rogers, whilst St Georges got off to a winning start with a 3-1 result against Jost Van Dyke Primary.

Jefferson Frank and Xiiomar Gunn (2) were on the score sheet for St Georges, whilst Henrique Warren replied for JVD.

In the BVIFA Open Boys High School League, BFEC are the form horses with a second successive victory, this time 4-1 over SDA, with goals coming Daniel Gilford (2), Devante Samuel and Joshua Ramprasad, whilst Nathan Nibbs scored for SDA, which followed a 2-0 defeat of ESHS, with goals from Jahdique Winchester and Sheldon Toohey.

St Georges also beat SDA, 2-0, with Lilly Pierce and Justin Smit doing the damage and ESHS beat St Georges, 4-2, thanks to goals from Sheldon Harry (2), Timothy Louis and Kemario Watson, which were answered by Guillaume Parkins and Pierce.

In the Open Girls Division, Cedar School pipped Claudia Creque by 1-0, with Darci Reich on hand to fire home the winner

Watson, Marcus Butler (2), Jeremy Grant and Kahil Farrington doing the damage in response to a Denvin Jones goal, which had made 3-1, before a late onslaught and St Georges and Cedar shared the points in a 2-2 draw, leaving BFEC in second and St Georges third.

Jahmal Prentices opener for St G cancelled out by Scott Kirk and then Luca Reich netting an equalizer for Cedar after Smith had put St G back in front in the second half.