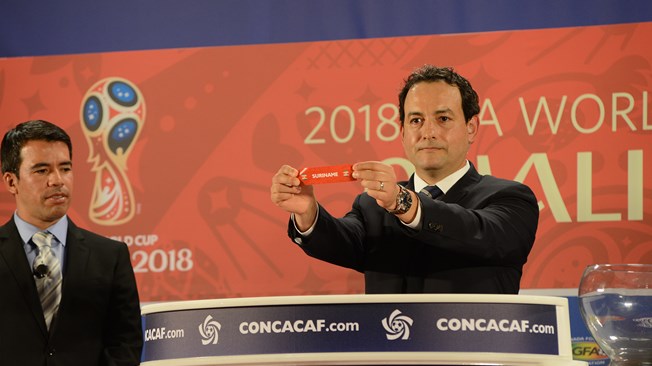 Thursday 15th January, 2015 – The road to the 2018 FIFA World Cup Russia™ kicked off, officially, in Miami Beach when representatives of CONCACAF conducted a preliminary draw for the region’s qualifying competition. 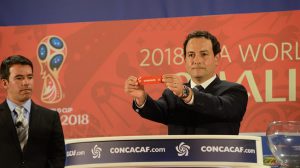 The event was overseen by Jeffrey Webb, President of the North, Central American and Caribbean Zone, but the job of pulling balls from the pots fell to a quintet of men who have all tasted World Cup action on the field of play. Shaka Hislop, goalkeeper of the Trinidad and Tobago Soca Warriors that made history in Germany 2006, Carlos Pavon of Honduras, Mexico favourite Pavel Pardo and former USA defender Tony Sanneh were all on stage to lend a hand.

The biggest VIP, however, was Brazilian World Cup winner from 2002, Ronaldo, who did his part to help decide the fate of some of the smallest fish in the footballing pond.

The 14 lowest-ranked teams in CONCACAF (as of August 2014) were drawn in direct competition. The seven home-and-away series of Round One will take place in late March 2015 and will see some of the smallest nations in the Football family fight it out, chasing a distant dream.

“The journey to Russia begins today. I hope all of you in attendance are ready to embrace passage to a greater goal,” said President Webb, who will watch nervously as his native Cayman Islands take on Belize in the first round. Addressing his fellow CONCACAF dignitaries, he added: “Let us show the world what our region can achieve. We had our most successful World Cup in Brazil this summer, but we’ve only just begun.”

Canada, who reached the World Cup in 1986 and won the CONCACAF Gold Cup in 2000, join the fray in Round Two, playing the winner of the BVI v Dominica match up, scheduled for June of this year, along with Cuba and Guatemala. El Salvador, who twice reached the finals, in 1970 and 1982, also enter the competition at this stage, which will again consist of home-and-away series.

The winners move on to Round Three, the final round to be contested via home-and-away series, where Jamaica and Haiti – both veterans of previous World Cups – begin their hopeful journey to Russia.

The region’s top-six join the party in Round four, from November 2015 to September 2016, in a round-robin format. Costa Rica, USA, Mexico, Honduras, Panama and Trinidad and Tobago will vie with the remaining victors from the previous rounds for places in the final Hexagonal round, which pits the top six teams in the region against each other for three direct tickets to Russia 2018, and one potential fourth. It will mark the culmination of a 33-month competition in the CONCACAF zone.

Ten teams from the CONCACAF region have qualified for the World Cup since the inaugural tournament in 1930. The region counts among its ranks some of the smallest members of the FIFA family, but has been experiencing a renaissance of late, as evidenced by Mexico, USA and Costa Rica all reaching the knockout rounds at Brazil 2014.

The first games under the banner of Russia 2018 will take place across the Caribbean and Central America in just over two month’s time. At that moment, the humble games that lead to all the pomp and circumstance, the glory-hunt of the finals of 2018, will have officially begun.