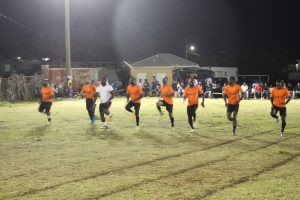 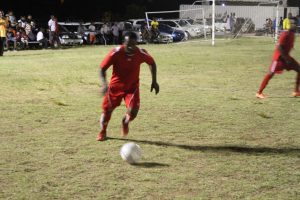 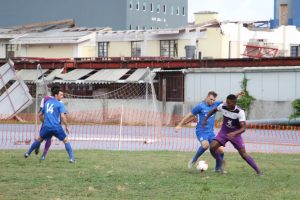 On Sunday evening in Virgin Gorda an unbelievable 15 goals were scored in just two games played and included 3 hat-tricks probably a record in our local league.

In game one on Sunday top of the Premier League One Love with 28 points played bottom of the league Sea Argo FC who have only ben able to muster up 7 points to date. It was Richard Morgan who had the game of his life seemingly unable to do anything wrong on the night. He found the goal in the 30th and 40th minute of the first half and then return in the 74th and 75th minute to score two more goals. Joining the party was Ofaniss Bassaragh scoring in the 32nd minute of the first half , while Kemar Cambell and Carl Stewart scored in the 48th and 54th respectively.

In game two of the double header, Sugar Boys FC came up against Rebels FC who had beaten them 1-0 in their last encounter at the A.O. Shirley Grounds in Tortola. The Sugar Boys were now playing on their home turf in Virgin Gorda and with the crowd behind them had a point to prove. Just when one thought we had seen the ultimate for the night in game one Andres Bailey hammers in three goals with his first in just the 3rd minute of play. He followed up with two more in the 11th and 23rd minute of play.

Joining the party with three goals was the speed man Mohammed Kochour who scored in the 8thth , 26th and 35th minutes of play to carry his tally to 9 goals for the season and keeps him in contention for the Golden Boots awards for 2018. Akeem Hendrickson also found the back of the net in the 25th minute of play. In the 36th minute of play Chadwick Evans seemly frustrated with the number of goals scored on the Rebels got himself a yellow card and one minute later picked up a Red card and was sent off. Rebels already short of players and with another player injured were unable to recover and the standing referee Norval Young was forced to call the game off. The win put Sugar Boys in second place of the overall standings with 25 gaols and in striking range of One Love.

On Sunday at the A.O. Shirley Grounds it seemed like a foregone conclusion after 88 minutes of play that 3rd place Islanders ( also last years champions) would defeat Walues FC. Walues had begun the game well and had some good attempts early in the game but typically of the Islanders FC, they always seem to find a way to win games. So it was no surprise when McTair James found the back of the net in the 26th minute of the half

The second half went very much to play for the Islanders but two lapses in concentration in the dying moments of the game  saw a much improved Walues team get two back to back goals by Chester James in the 89th and 90th minute to win the game seconds before the whistle blew. Despite the loss Islanders still hold third spot with 23 points while the Walues hold on to the 7th spot with 10 points.